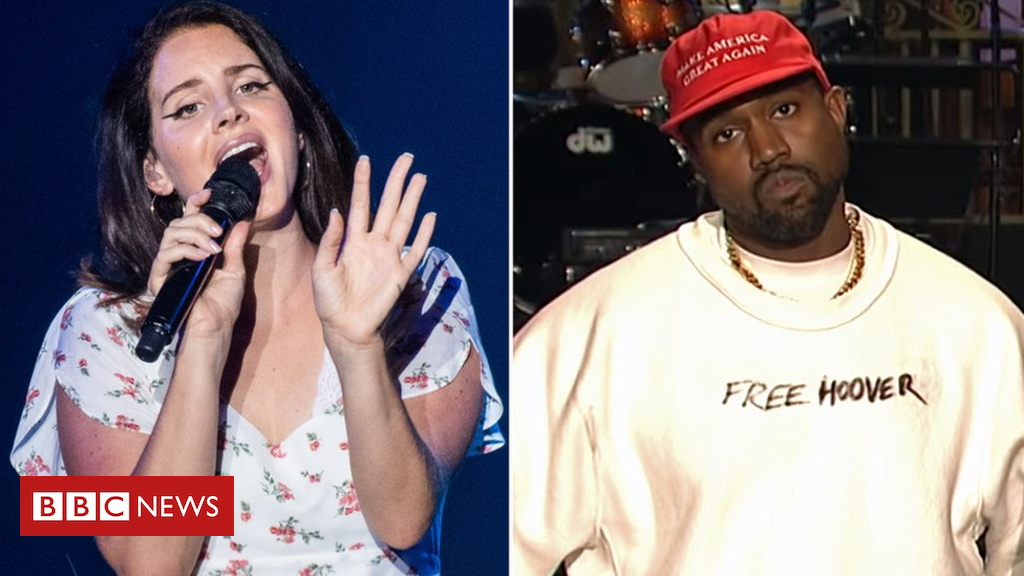 Lana Del Rey has criticised Kanye West for his support of Donald Trump.

The singer, who performed at West’s wedding to Kim Kardashian in 2014, described his endorsement of the US president as “a loss for the culture”.

She wrote to West after an appearance on Saturday Night Live, which ended with an unscripted, pro-Trump rant.

“I can only assume you relate to his personality on some level,” wrote Del Rey. “Delusions of grandeur, extreme issues with narcissism.

“None of which would be a talking point if we weren’t speaking about the man leading our country.

“If you think it’s alright to support someone who believes it’s OK to grab a woman by the pussy just because he’s famous, then you need an intervention just as much as he does.”

She signed off saying: “Message sent with concern that will never be addressed.”

West played three songs on this weekend’s episode of Saturday Night Live, hours after announcing he had changed his name to Ye.

He dressed as a Perrier bottle while performing his latest single, I Love It; but later sported a red “Make America Great Again” cap to play Ghost Town with Kid Cudi and 070 Shake.

Following that song, which closed the show, West delivered a rambling political speech to the audience.

It was not broadcast as part of the show, but excerpts filmed by the audience and shared on social media saw the rapper discuss his support for President Trump, his pledge to run for president in 2020, the need for a “dialogue not a diatribe” and other themes familiar from his recent interviews.

“So many times I talk to a white person and [they] say, ‘How could you like Trump, he’s racist?'” he said at one point.

“Well, if I was concerned about racism I would’ve moved out of America a long time ago.”

He added: “The blacks want always Democrats … You know it’s like the plan they did, to take the fathers out the home and put them on welfare … Does anybody know about that? That’s a Democratic plan.”

Behind him, cast members remained silent, many bowing their heads and rolling their eyes. Some audience members cheered, while others booed.

Comedian Chris Rock, a former Saturday Night Live performer who filmed some of the speech, can be heard laughing and saying “Oh My God” as it continued.

West went on to suggest that Saturday Night Live had tried to stop him from making a political statement.

But he ended his monologue by thanking the show “even though some of y’all don’t agree”.

He then posted a message on Twitter explaining why he had worn the MAGA hat.

“This represents good and America becoming whole again,” he wrote. “We will no longer outsource to other countries. We build factories here in America and create jobs. We will provide jobs for all who are free from prisons as we abolish the 13th amendment.

The 13th Amendment to the US Constitution, ratified after the civil war, abolished slavery and involuntary servitude.

West, who caused uproar earlier this year by referring to slavery as “a choice”, appears to object to the amendment on the grounds that it “allowed for prisoners to be used as slave labour,” observed political journalist Yashar Ali.

“But he doesn’t articulate that in his tweet leaving people confused and others delighted.”

West later clarified the comments in a late-night tweet that said he wanted to “amend not abolish” the 13th Amendment, calling it “slavery in disguise – meaning it never ended.”

The star’s political stance has increasingly infuriated his fellow musicians, with the likes of John Legend and Chance The Rapper criticising his support of Donald Trump.

“We love you, we’re not bullying you. But you gotta stop. That [expletive] ain’t right.”

Questlove, the drummer for the Roots, the rap group who also serve as the in-house band for Jimmy Fallon’s US chat show, posted Rock’s video with the caption: “I’m going to sleep. I’m done man. Done.”

However, West found one person who enjoyed his latest performance.

“Like many, I don’t watch Saturday Night Live (even though I past hosted it) – no longer funny, no talent or charm,” tweeted President Trump. “It is just a political ad for the Dems.

“Word is that Kanye West, who put on a MAGA hat after the show (despite being told “no”), was great. He’s leading the charge!”

Like many, I don’t watch Saturday Night Live (even though I past hosted it) – no longer funny, no talent or charm. It is just a political ad for the Dems. Word is that Kanye West, who put on a MAGA hat after the show (despite being told “no”), was great. He’s leading the charge!

Other conservatives also voiced support for the star; and accused Saturday Night Live of deliberately censoring his speech.

West had promised to drop a new album, Yandhi, on Saturday following the SNL appearance – but it failed to materialise.