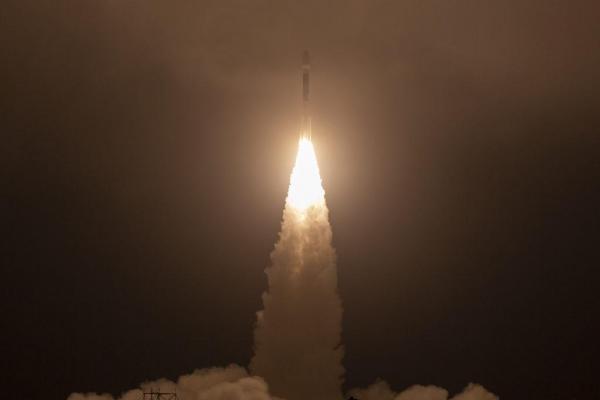 ICESat-2 was carried into space at 6:02 a.m. PDT from California’s Vandenberg Air Force Base, NASA said. The scheduled time was 5:46 a.m. but it had a 40-minute launch window.

The spacecraft deployed its four solar panels and is drawing power, meaning it successfully went into orbit. It is orbiting the globe, pole to pole, at 17,069 mph from an average altitude of 290 miles.

Ground stations in Svalbard, Norway, acquired signals from the spacecraft.

ICESat-2’s only instrument is a laser system designed to measure the height of Earth’s surface — most importantly, sea ice’s height. The sea ice’s height will help scientists measure its thickness.

“ICESat-2 will let us get at the thickness by measuring the sea ice freeboard — that’s the height of the sea ice above the ocean,” Tom Neumann, ICESat-2’s deputy project scientist, told UPI. “A larger freeboard directly corresponds to a great sea ice thickness, given that we know the relative density of ocean water and ice.”

Because the satellite’s instrument can shoot six laser pulses — not just one — at high speeds, ICESat-2 will be able to observe changes in sea ice coverage and thickness in unprecedented detail. Scientists will be able to combine the new ice-related data with measurements captured by a variety of other satellites and instruments, helping scientists uncover hidden relationships between ice and other ocean and atmospheric phenomena — wind, current, temperature, precipitation and more.

In addition to measuring minute changes in sea and land ice, ICE-Sat-2 will use its height-measuring lasers to track sea levels, ocean waves and forest canopies.

“Science often moves forward when scientists figure out new and more precise ways to measure things, and with ICESat-2, and that’s exactly what we’re going to do,” NASA scientist Tom Wagner told UPI. “There’s going to be a lot of unexpected science to come out of this mission.”

The launch was ULA’s Delta II rocket’s 153rd success — and its last because ULA is retiring the model. ULA will have to rely even more heavily on its workhorse rocket, the Atlas V.