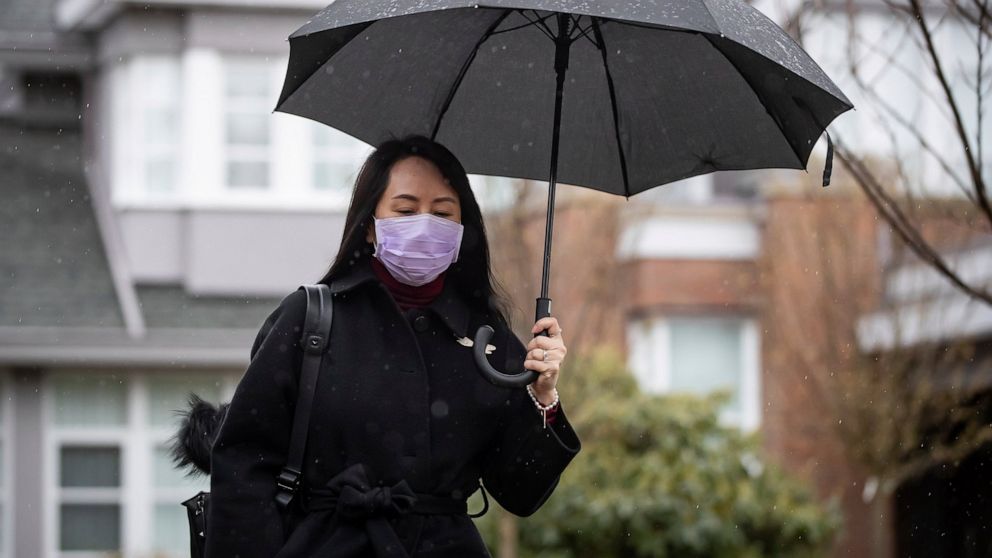 VANCOUVER, British Columbia — Lawyers for a senior executive for Chinese communications giant Huawei Technologies argued at an extradition hearing Friday that her detention and questioning at the Vancouver airport violated her rights, saying agents had no reason to question her about the company’s activity in Iran except to assist U.S. investigators.

Meng Wanzhou, Huawei’s chief financial officer who is also the daughter of the company’s founder, was arrested at the airport in late 2018 at the request of U.S., which wants her extradited to face fraud charges. The arrest infuriated Beijing, which sees her case as a political move designed to prevent China’s rise.

The U.S. accuses Huawei of using a Hong Kong shell company called Skycom to sell equipment to Iran in violation of U.S. sanctions. It says Meng committed fraud by misleading the HSBC bank about the company’s business dealings in Iran. Much of the case centers around an August 2013 PowerPoint presentation made to an HSBC executive during a lunch in Hong Kong.

Meng’s lawyers claim her extraction should be halted because of an abuse of process, saying Canada Border Services Agency officers detained and questioned her without a lawyer, seized her electronic devices and put them in special bags to prevent wiping, and compelled her to give up the passcodes before her official arrest.

The questions Canada Border Services officer Sanjit Dhillon asked Meng dealt with Huawei’s business dealings, something that would have “zero” interest to determining her admissibility to Canada, Duckett said.

“The value would only be to a U.S. audience,” she said.

Duckett also questioned the distress expressed by another border official who claimed he had mistakenly given the passcodes to Meng’s devices to the Royal Canadian Mounted Police.

Duckett said Associate Chief Justice Heather Holmes should be skeptical of the testimony of the Canada Border Services officers.

Meng attended the hearing wearing a large bandage covering the middle finger on her right hand, a pink mask and slacks that revealed a monitoring bracelet on her ankle. She listened to the proceedings with an interpreter.

Meng’s lawyers will be back in court next month arguing that the U.S. is exceeding the limits of its jurisdiction by prosecuting a foreign citizen for actions that took place in Hong Kong and that Canada was misled by the U.S. about the strength of its case.

Earlier this month, her lawyers said comments made by then U.S. President Donald Trump turned Meng into a “bargaining chip” and “co-opted the extradition process.”

Soon after Meng’s arrest, China arrested Canadians Michael Spavor and Michael Kovrig in apparent retaliation and charged them with spying. Both have remained in custody with limited access to visits by Canadian consular officials.

Spavor appeared at a closed-door hearing in Dandong, China, on Friday. Canada said its consular officials were refused permission to attend the proceedings, which ended after about two hours with no verdict announced.

Kovrig is scheduled to appear in court Monday.

Besides the arrest of Kovrig, a former diplomat, and Spavor, an entrepreneur, China has also placed restrictions on various Canadian exports to China, including canola oilseed. China also handed death sentences to four Canadians convicted of drug smuggling.

Meng remains free on bail in Vancouver and is living in a mansion.