“Think I’m going to put together an ownership group for the the Dream,” James tweeted Wednesday. “Who’s in?”

Betts, actor Kevin Hart and The View co-host Sunny Hostin were among the celebrities to reply to the tweet and said they were interested in buying part of the franchise.

“Count me in,” Betts tweeted.

U.S. Sen. Kelly Loeffle (R-Ga.), who is projected to lose a runoff election, is a co-owner of the Dream. Loeffler has said she “adamantly” opposes the Black Lives Matter movement, which has led to conflict between Dream players and ownership.

She sent a letter to WNBA commissioner Cathy Engelbert in July to criticize the WNBA’s support of the movement, as players around the league protested police brutality and racial inequality.

Several Dream players were photographed wearing “Vote Warnock” shirts days before the election. James tweeted a photo of players wearing the shirts along with his offer to buy the franchise.

Loeffler bought a stake in the team in 2011. The WNBA said in July that she has not served on the league’s board of governors since October of 2019 and is not involved in the day-to-day operation of the Dream.

Mary Brock serves as the other co-owner of the Dream. Brock also joined the Dream ownership group in 2011. Her husband, John Brock, is a former chairman and CEO of Coca-Cola Enterprises, Inc. 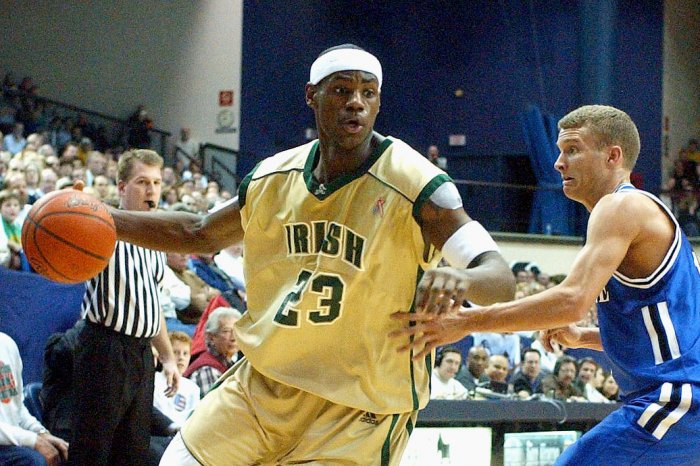 St. Vincent-St. Mary High School senior LeBron James (L) drives around a Zanesvuille defender in Akron, Ohio, on February 14, 2003. James is expected to be the No. 1 pick in the NBA draft. A couple months later, the Cleveland Cavaliers coach was suspended because James worked out with the team before he graduated from high school. Photo by Tom Cammett/UPI | License Photo