Where you live can have a big impact on whether you’re able to amass a security nest egg.

Experts generally recommend you have at least six months’ cash on hand in case you lose your job or have a medical or other emergency.

However, data from personal finance website Bankrate show that there are cities where you’re more likely to stash away that rainy day fund — and others where it’s nearly impossible to get out of the red.

Cities were ranked based on housing costs, such as mortgage, insurance and property taxes. Other expenses, such as groceries, health care, transportation and utilities, were also factored in. 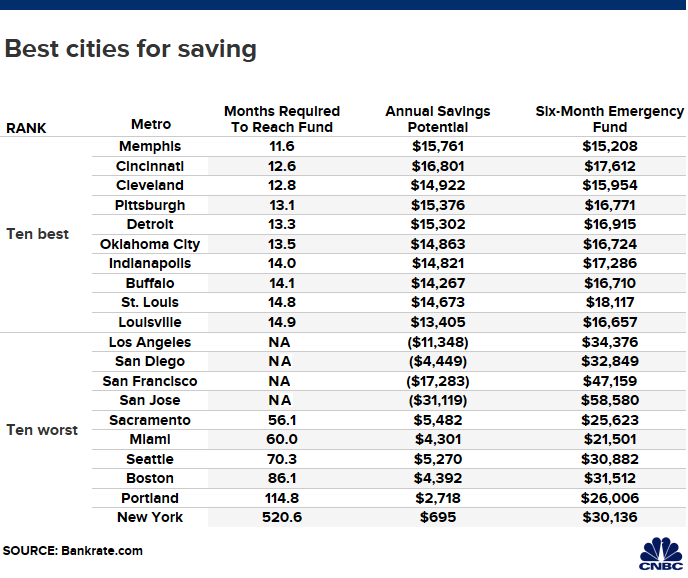 Memphis came up on top. The city’s residents can save more on an annual basis than they need in their six-month emergency savings fund, according to Bankrate’s calculations.

In other cities that rounded out the top five — Cincinnati, Cleveland, Pittsburgh and Detroit — it would take an estimated 13 months to build that six-month fund.

In the cities that fell to the bottom of the list, those emergency reserves are much farther, if not completely, out of reach.

In the New York area, for example it would take an estimated 521 months to achieve that savings goal.

And in other cities — San Diego, Los Angeles, San Francisco and San Jose — it would take an immeasurable amount of time to build up those reserves. Residents in those California cities are more likely to be in debt.

Regardless of where you live, you should not give up on reaching your savings goal.

“Set yourself up now for saving that is going to benefit you tomorrow and down the line,” said Adrian Garcia, data analyst at Bankrate.

These steps can help you get started:

To compile its ranking, Bankrate used data from sources including the U.S. Census Bureau, the Council for Community and Economic Research’s Cost of Living Index and ATTOM Data Solutions.