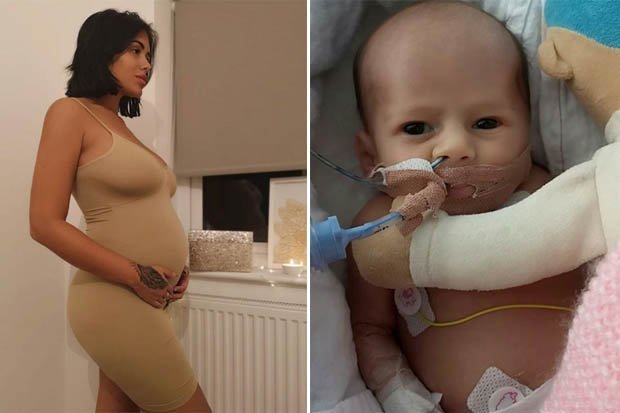 After giving birth seven weeks early, Malin Andersson was asking for prayers after her baby girl was in intensive care at Great Ormond Street Hospital.

She was giving her followers updates, but she’s sadly announced this morning that her baby girl has passed away.

Her daughter, who she named Consy, was born on December 23, and Malin told her followers this morning, that she passed away yesterday.

Sharing a photo of her daughter on Instagram, she wrote: “Completely in love with you…

“I’m so sorry I couldn’t do anymore. Go be with grandma Consy”

“And my mum just wanted you to be with her.

“Your time wasn’t ready yet, mummy loves you, I stayed with you each day.”

She added: “You opened your eyes one last time for me and I saw those beautiful big brown eyes.

“I’m so sorry I couldn’t do anymore. Go be with grandma Consy.”

Her daughter was born premature, and Malin admitted there were complications throughout the birth after announcing her arrival on January 1.

Almost a week after announcing her arrival, Malin explained that watching her daughter in hospital was the most difficult time she’s ever gone through.

She added: “I just want to hold her.

BABY GIRL: Malin shared the news on her profile this morning (Pic: INSTAGRAM)

“It’s different to my mum last year. My mum was ready to go, my little girl isn’t.”

Malin’s mum sadly died in 2017 after a battle with cancer, and Malin announced her pregnancy months later.

She had spoken on her happiness over finding out she was having a baby girl after the loss of her mum.

In Malin’s recent post, she wrote a tribute about her late mother, explaining that her daughter will be with her grandma.

Fans have sent their thoughts and prayers to her at this difficult time.