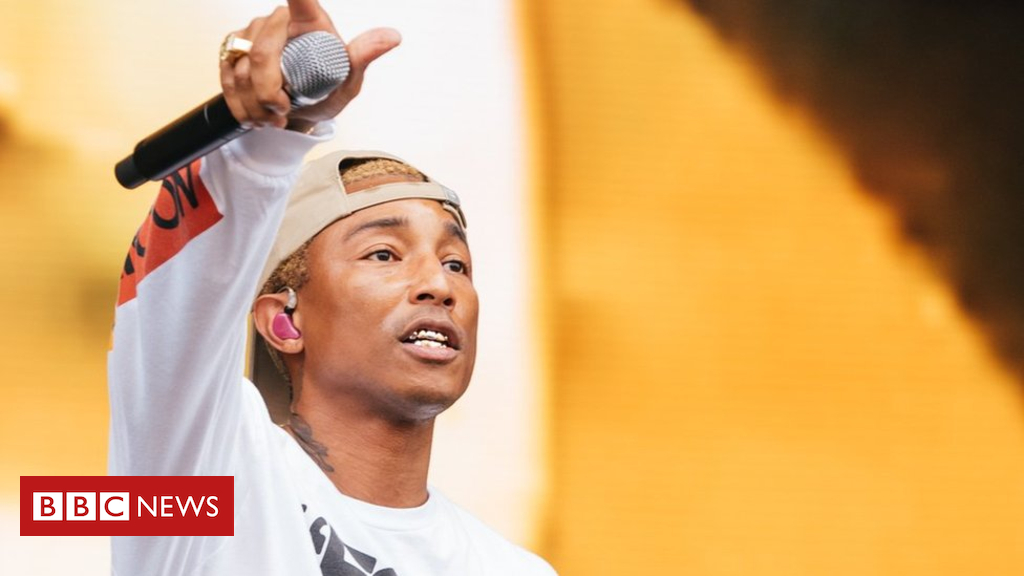 “We stand for the resistance,” says Pharrell Williams, playing London’s Lovebox festival as US President Donald Trump makes his first official visit to the UK.

“They came to your country because they want to divide you but we don’t believe in that. We believe in inclusivity.”

The star was one of several US acts who urged UK fans to resist the rising tide of right-wing politics.

“We got to fight that stuff,” said Saturday’s headliner, Childish Gambino.

“I know it’s scary – because we know what happens to people who fight. But we got to stick together.”

The star, whose provocative single This Is America is one of the most politically-charged records of the Trump era, also praised the protests taking place in the UK this weekend.

“You know, I lived in London for a whole year,” said the singer. “And I was very proud to see that big balloon.”

His comments prompted huge cheers from the audience at the festival’s new home in Gunnersbury Park, a leafy estate in West London that was formerly home to the Rothschild family.

There was something odd about seeing the globe’s biggest hip-hop stars juxtaposed against the stately manor (and the M4 flyover) but great artists have the ability to transport you out of your environment to their own world.

Nobody did this better than US R&B singer SZA – whose nuanced, sophisticated stories of desire and insecurity summoned some elemental responses from her female fans on Friday afternoon.

Take, for example, Supermodel – a song about an ex who leaves her for a prettier woman, on which the singer asks “Why am I so easy to forget like that?”

Rather than sing along, some concert-goers screamed the words with barely-controlled passion – a sign of familiarity and solidarity with the pain being reflected on stage.

Sadly for them, the star’s set ended abruptly after just four songs.

She had arrived half an hour late for her forty-minute set, apparently after getting caught up in the anti-Trump protests in central London.

Although she pleaded with stage managers to continue, they pulled the plug – and the audience yelled their disapproval as she was physically removed from the stage.

sorry but why did I pay £60 to see SZA yesterday and after 20 mins they turned her mic off and I only witnessed 4 songs? That’s not a “headliner” #Lovebox

Fans were left wanting more from Streatham MC Dave, too… Even though he played a full show on the festival’s second stage.

The 20-year-old was literally left speechless by a crowd of devotees that spilled out of the tent into the surrounding field. He, apparently genuinely, forgot the first verse to 100M’s, leaving fans to fill in the gaps.

“That was insane,” he said afterwards. “In my three short years of performing, I’ve never seen anything like that.”

Back on the main stage, rap icons Wu Tang Clan were past their best, wheezing their way through former glories with all the energy and demeanour of car park attendants (a triumphant performance of Gravel Pit aside).

They were shown up by the athletic virtuosity of Anderson .Paak and the visceral power of headliner Skepta, whose very arrival prompted a thunderstorm.

The crowd were instantly soaked but, by the end of a set of “bare bangers” (Skepta’s words), the dancing was so frantic that steam rose from the moshpit.

Even local residents joined in.

A scorching Saturday opened with the futuristic R&B star Kali Uchis, who brought out Jorja Smith to duet on Tyrant; while Outkast’s Big Boi delivered a dose of feel-good hip-hop during England’s World Cup playoff against Belgium.

“I know there’s a soccer game going on and y’all could be anywhere – so we appreciate you being here,” he announced.

Lovebox was established in 2002 by dance act Groove Armada but, like last week’s Wireless festival, it has slowly and smartly refocused its line-up towards grime, hip-hop and R&B – drawing an audience that’s both younger and more engaged.

Unlike the crowds at Glastonbury or Hyde Park, who turn up for the experience as much as the music, these fans wanted to see and hear (and Instagram) their idols.

Pharrell’s band N.E.R.D got the tone just right – throwing in crowd-pleasing covers of Seven Nation Army and Kendrick Lamar’s (Pharrell-produced) Alright alongside the rabble-rousing beats of Rockstar and Lap Dance.

The star played ringmaster, conducting the moshpit and hauling fans (including one in a wheelchair) on stage, while the video screen flashed up messages like “bring the ruckus”.

Gambino was more relaxed – leaning on the supple funk of his Grammy-winning album Awaken, My Love as he strutted, shimmied, slunk and spun his way around the stage.

Even though he’s rarely troubled the UK charts, the audience knew the words to tracks like Sober, 3005 and the sublime Redbone off by heart.

Two new songs – Summertime Magic and Feels Like Summer – got their UK debut, and suggested his new album will substitute the caustic lyrics of This Is America for a more optimistic message.

“To be free, we must all be together,” he told the crowd, as the festival came to a close.