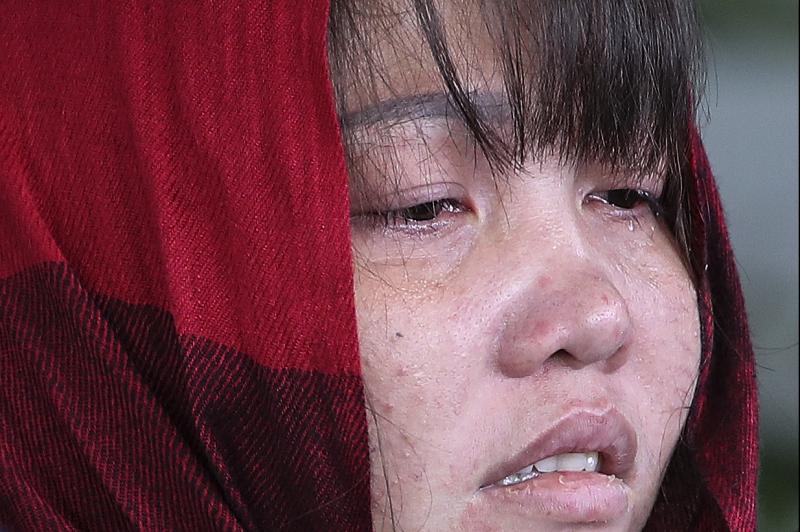 The Thursday ruling to go forward with the murder trial for Doan Thi Huong, 30, follows Malaysian Siti Aisyah, 26, her co-accused in the murder, gaining her freedom earlier in the week.

The prosecution told the Malaysian court Thursday that the attorney general had considered “all reasons” but it wouldn’t drop the case, Al Jazeera reported.

The prosecution did not elaborate on the decision.

“I am not angry that Siti has been freed,” Doan said in tears after the decision was announced. “Only God knows that we did not commit the murder,” the Telegraph reported.

Siti was suddenly released Monday without an acquittal after the prosecution asked for her charges to be dropped without giving an explanation.

The two women have argued that they were tricked into committing the crime by North Korean agents believing that they were conducting a prank on a reality television program.

The women allegedly smeared a lethal dose of VX, a chemical nerve agent, on the face of Kim Jong Nam at the Kuala Lumpur International Airport on Feb. 13, 2017.

Kim Jong Nam, the eldest son of former North Korean leader Kim Jong Il, was considered the heir apparent until 2001 when he became estranged from this family.

His death is allegedly tied to his younger half brother’s attempt to solidify his claim as leader of the North Korean regime.

Doan’s lawyer Hisyam Teh Poh Teik lodged the appeal for full acquittal earlier in the week and now accuses Attorney General Tommy Thomas of being unjust.

“The decision not to withdraw does not sit well with our criminal justice system. There is discrimination as the prosecution favors one party to the other,” he said.

Speaking to reporters outside of court after the decision, he said his client was being used as a “scapegoat.”

“Her case is the same as that of Siti Aisyah, there are no differences, similarities all around. We ran the same defense that they have no knowledge, no intention to kill,” he said.

The trial has been adjourned until April 1, which will allow for him to lobby the Vietnamese government to appeal to the Malaysian government for Doan’s release.

“We hope that the Vietnamese government, which we believe they are doing right now, put further pressure on the Malaysian government to ensure that there is equality,” he said.

This lobbying would be on top of Vietnam’s unprecedented move earlier this week following Siti’s release of making a public request for Doan’s acquittal.

Under the Malaysian penal code, the conviction of murder comes with a mandatory death sentence.

Doan has pleaded not guilty.