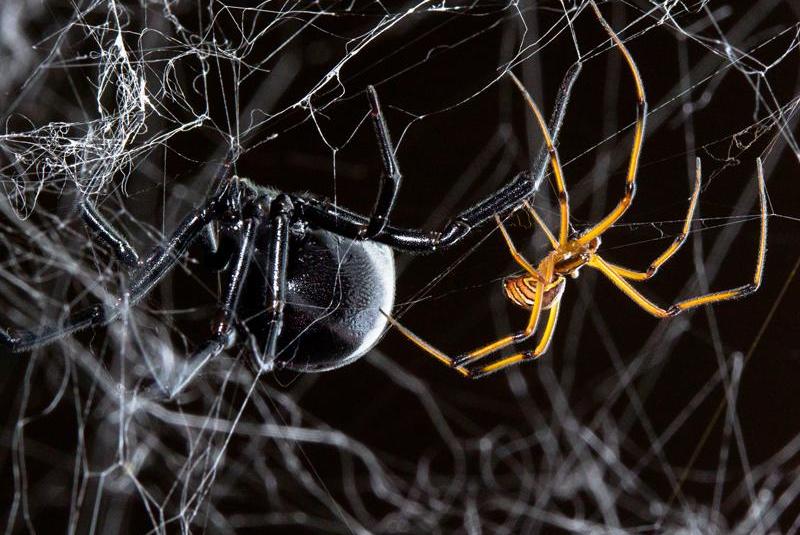 Aug. 2 (UPI) — To find mates, male black widow spiders follow the silk trails left by their rivals, according to a new study. The revelation, detailed this week in the journal Proceedings of the Royal Society B, surprised scientists at the University of Toronto Scarborough.

Scientists assumed males followed the scents, or pheromones, released by females and avoided those emitted by males. It is the pattern followed by most mate-seeking insects.

“We expect males to use female cues to find a potential mate, and use those left by their rivals to avoid them,” Catherine Scott, a doctoral candidate at UTSC, said in a news release. “We found male black widows follow rather than avoid rival males, using their silk trails as highways that rapidly lead them to a female’s web, even if they can’t smell the female themselves.”

Given the risky nature of sexual relations and competition, it makes sense that male spiders would stick to previously traveled routes. Only 12 percent of males make it through the search for a mate alive.

On any given night, only a few females are receptive to mates. Even spiders that find a willing mate are sometimes cannibalized post-coitus. Female black widows are significantly larger than their male suitors.

“Males are better off competing for the same female instead of risking missing out completely,” said black widow expert Maydianne Andrade, a professor at UTSC. “Courtship can also last for hours, so even if a male isn’t the first to arrive on the web, if he gets there quickly enough he may be able to win the competition to be the first to mate.”

For many hours over the course of several weeks, researchers observed the behavior of male black widows on a beach on Vancouver Island. They found male spiders were quicker to track down a potential mate if they had access to male pheromones. When spiders only had female pheromones to go by, they were slower. The presence of a rival’s silk, and its scent, signal to other males that a willing mate may be nearby.