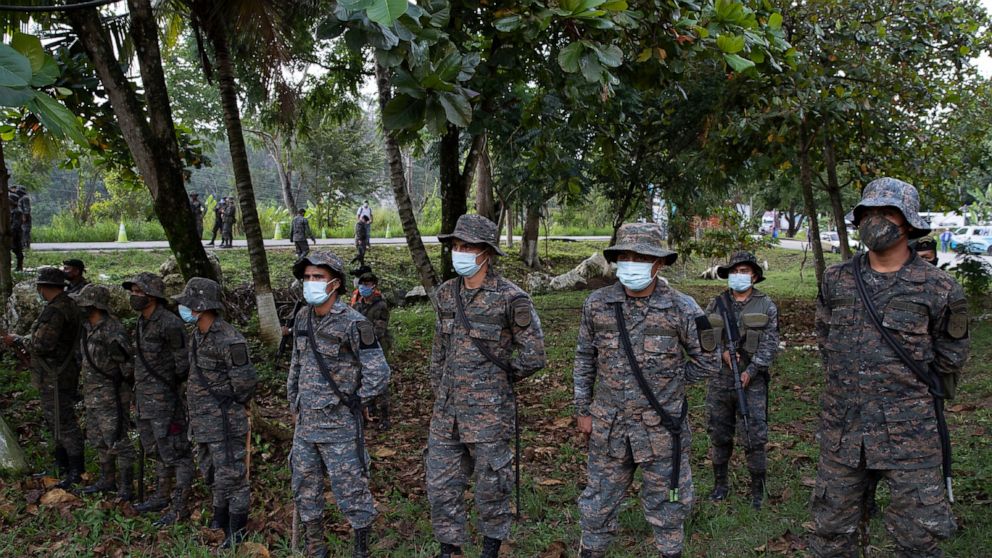 POPTUN, Guatemala — Hundreds of Honduran migrants who had entered Guatemala this week without registering were being bused back to their country’s border Saturday by authorities who met them with a large roadblock.

By 5 a.m. Saturday, none of 1,000 or so migrants who had been stalled by police and soldiers remained along a stretch of rural highway remained. Police said that hours earlier, migrants had boarded buses and army trucks to be taken back to the border.

Small groups of fewer than 10 migrants each could still be found walking along the highway before the roadblock Saturday morning.

Olvin Suazo, 21, was walking with three friends, all from Santa Barbara, Honduras.

“We’re going to continue,” he said. “We were resting and the bigger group continued. We didn’t know what happened to them.”

The four, all in their early 20s, are farmworkers. They heard about the caravan that formed earlier this week in San Pedro Sula via WhatsApp and Facebook.

Late Friday, hundreds of migrants headed for the United States had become increasingly desperate after running into the roadblock.

Seldom since 2018 had the prospects for a migrant caravan been so discouraging. Guatemala’s president saw them as a contagion risk amid the coronavirus pandemic and vowed to deport them. Mexico’s president speculated that the caravan was a plot to influence the U.S. elections. And newly formed Tropical Storm Gamma threatened to dump torrential rain on their planned route through southern Mexico.

On Friday, over 100 Guatemalan soldiers and police blocked the migrants, who became increasingly frustrated with the lack of food and forward movement after walking from Honduras earlier this week.

Migrants’ voices rang out on the rural highway, demanding authorities either let them through or provide them food.

Guatemala immigration authorities said some of the original group of about 2,000 migrants had agreed to return to Honduras, though Guatemala’s vice minister of foreign relations, Eduardo Hernández, issued a video Saturday complaining that Honduras was refusing to receive at least some of them.

The others had split between two routes: Some traveled north to Peten, where the roadblock was, and others walked, hitched rides took buses west toward the capital, Guatemala City.

Some had hitched rides aboard passing trucks. Wilmer Chávez, 35, got aboard the bed of one truck in his wheelchair with the help of fellow Honduran migrants.

In Mexico, President Andrés Manuel López Obrador suggested Friday that the estimated 2,000 migrants who set out from San Pedro Sula, Honduras, had perhaps been organized with U.S. politicis in mind.

“I think it has to do with the election in the United States,” López Obrador said. “I don’t have all the elements, but there are indications that it formed with that purpose. I don’t know to whose benefit, but we’re not naive.”

The new group was reminiscent of a migrant caravan that formed two years ago shortly before U.S. midterm elections. It became a hot issue in the campaign, fueling anti-immigrant rhetoric.

But on Friday, Mexico’s point man on the coronavirus pandemic, Assistant Health Secretary Hugo López-Gatell, sounded more conciliatory, saying the migrants didn’t represent a health threat and that Mexico was “morally, legally and politically obliged to help them.”

On Thursday, Guatemalan President Alejandro Giammattei vowed to return the migrants to Honduras, citing efforts to contain the pandemic.

Migrant caravans from Central America gained popularity in recent years because they provided some degree of safety in numbers and allowed those who couldn’t afford to pay a smuggler to attempt the trip to the United States.

At first, they received generous support from the communities they passed, especially in southern Mexico. Last year, however, U.S. President Donald Trump threatened crippling tariffs on Mexican imports if it didn’t slow the flow of migrants to the U.S. border. Mexico responded by deploying the National Guard and more immigration agents to intercept large groups of migrants.

The last attempted caravan was broken up by Mexican guardsmen in January.

This week, Mexico has been warning that it will enforce its immigration laws and even prosecute people who knowingly put public health at risk.

The U.S. has essentially closed its border to legal immigration and entering illegally is as difficult as ever.