The rover drove about 21 feet Thursday and used its steering function, performing better than it did on Earth said Anais Zarifian, a Perseverance mobility engineer for NASA, said in a news briefing.

Perseverance creeps along at about the same speed as NASA’s previous rover, Curiosity, which still is functioning on Mars, at about .01 mph, Zarifian said. The new rover landed on the planet Feb. 18 in an area named Jezero Crater.

But Perservance’s systems allow it to move farther in a given day because it can robotically avoid hazards like big rocks and sand traps.

“We’ll have less time planning drives and down time, and more time to do science,” she said.

Engineers said they installed new surface software and successfully checked out nearly every system and subsystem on the rover to prepare it for its primary mission — drilling rocks for evidence of ancient life on Mars.

The rover also spotted a rock outcropping of high interest to NASA scientists, about 1 1/2 miles away and about 33 feet high, said Katie Stack Morgan, a NASA deputy project scientist on the mission.

“These rocks look noticeably different, in that you can actually [see] layers within the rocks … likely deposited by rivers flowing into the ancient lake” at Jezero Crater, Stack Morgan said.

NASA’s science and engineering teams are working together to choose the best route to investigate the river deltas, she said. A final decision on the route probably won’t be made until Perseverance’s helicopter, Ingenuity, flies and scopes out the region, she said.

“Before we can think about exploring the Jezero delta, we have to figure out how to get the rover in there,” Stack Morgan said.

The rover’s scheduled timeline on the Red Planet is about two Earth years, but most of its systems are expected to last much longer. The rover was launched from Kennedy Space Center in Florida in July. 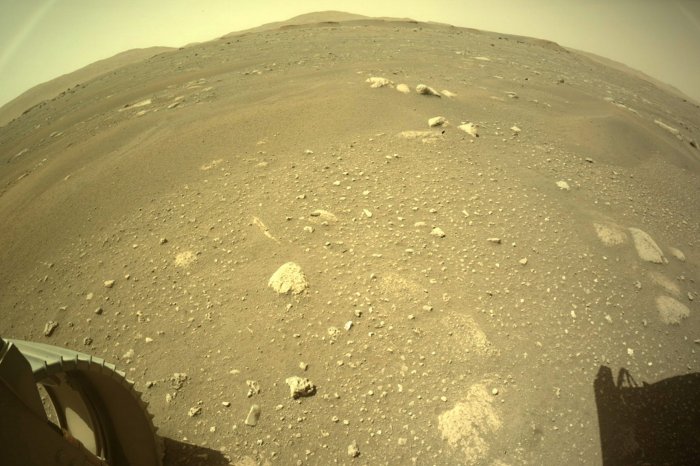 NASA’s Perseverance Mars rover acquired this image of the area in back of it using its onboard Rear Left Hazard Avoidance Camera on March 4. A key objective for Perseverance’s mission is astrobiology, including the search for signs of ancient microbial life. Photo courtesy of NASA | License Photo