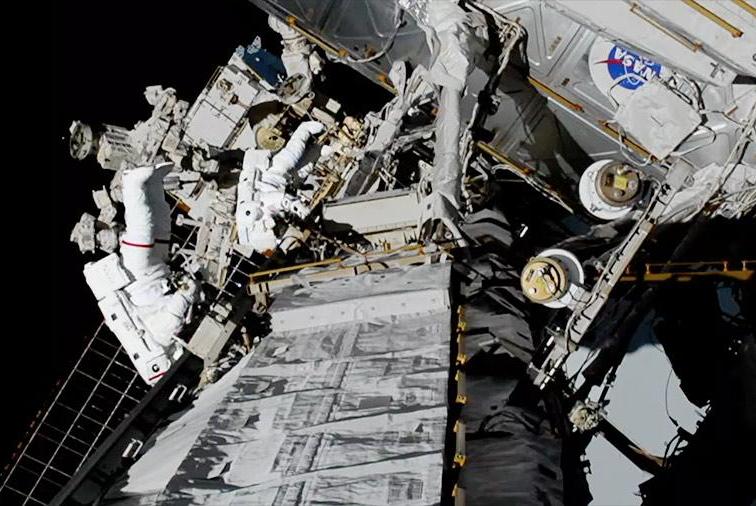 Oct. 18 (UPI) — NASA astronauts Christina Koch and Jessica Meir are back inside the space station having completed a historic spacewalk — the first featuring two women.

The mission was originally supposed to last rough 5.5 hours, but the duo ended up spending 7 hours and 17 minutes outside the space station. After completing their main mission, replacing a broken power controller, Koch and Meir extended their time in space in order to complete some “get ahead” work, NASA announced on Twitter.

The historic mission began on Friday morning, as the pair exited the International Space Station and commenced the 221st spacewalk in support of ISS. The two flight engineers switched their spacesuits to battery power just before 8 a.m. ET Friday.

To begin the mission, the space station’s robotic arm helped the duo get to the far side of the ISS. At their work station on the end of the Port 6 truss structure, Koch and Meir carefully removed the broken power controller, also known as a battery charge-discharge unit, or BCDU. At noon, they returned the defunct power controller to the Quest airlock. Afterwards, the two astronauts worked to install a new BCDU.

“The BCDU regulates the charge to the batteries that collect and distribute solar power to the orbiting lab’s systems,” according to a recent update from NASA.

Over the last year, most extravehicular activities have involved battery swaps. One by one, NASA astronauts detached older batteries and replaced them with newer, more efficient lithium ion batteries. But after the most recent glitch, NASA officials decided to temporarily postpone all battery work.

Koch and Meir were originally supposed to make history later this month, when they were scheduled to perform battery work on Oct. 21. Instead, they performed electrical repairs and helped NASA engineers figure out why two power controllers failed in such a short amount of time.

“When you have one failure, you go, oh that’s interesting, but when you have two, you stop and think about it,” Kenny Todd, manager of ISS Operations Integration, told reporters during a teleconference Tuesday.

Once NASA engineers and their partners on the space station get to the bottom of the BCDU glitch, battery replacement work will resume.

“In the meantime, the five planned spacewalks to repair a cosmic particle detector, the Alpha Magnetic Spectrometer, are still on the calendar for November and December,” NASA reported.

Despite the historic nature of Friday morning’s spacewalk, Meir and Koch told reporters they remained focused on the details of the mission.

“What we’re doing now shows all that work went into it to get us where we are today,” Meir told reporters earlier this month. “And the nice thing about it for us is that we don’t really think about it on a day-to-day basis.”

Still, the duo said they’re aware of the spacewalk’s historical and symbolic importance.

“There are a lot of people that derive motivation from inspiring stories about people that look like them, and I think that is an important aspect of the story to tell,” Koch said.