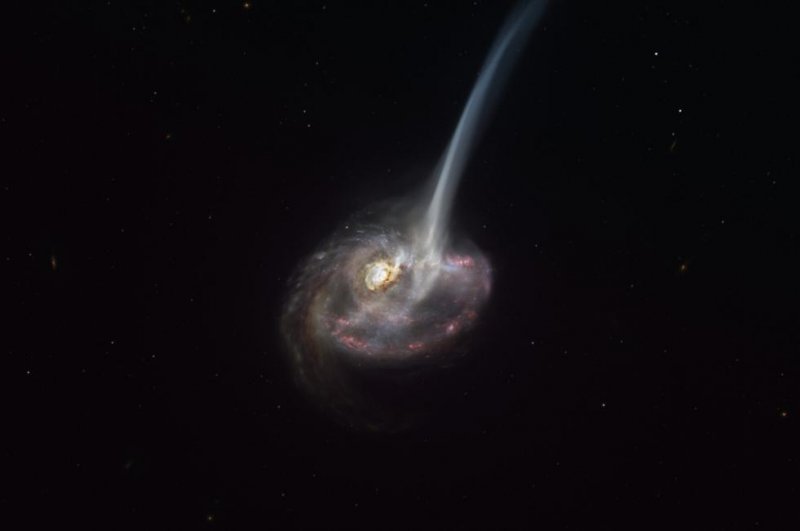 Jan. 11 (UPI) — Galaxy mergers in the early universe may have curbed star formation and stunted the growth of young galaxies, according to a new study published Monday in the journal Nature Astronomy.

Over the years, scientists have observed large numbers of massive, dead galaxies in the nearby universe. Astronomers have struggled to explain how these galaxies, populated mostly by dead stars, came to be.

As the images revealed, the merger that formed ID2299 sent large amounts of star-forming gas into the intergalactic medium. The loss effectively shut down star formation for a few hundred million years.

Because the light from ID2299, fielded by ALMA, has been traveling for billions of years, it offers astronomers a glimpse of the universe when it was just 4.5 billion years old — the phase when the cosmos was most active.

But the period’s frenzy of star formation couldn’t last.

Previously, both direct observation and cosmological simulations have shown the winds generated by supermassive black holes can expel star-making gas and dust, preventing the birth of new stars.

Likewise, the winds produced by a burst of intense stellar-formation activities can push stellar ingredients out of growing galaxies and into intergalactic space.

The latest findings offer another explanation for such slowdowns.

“The gravitational interaction between two galaxies can thus provide sufficient angular momentum to kick out part of the gas into the galaxy surroundings,” lead author Annagrazia Puglisi said in a news release.

“This suggests that mergers are also capable of altering the future evolution of a galaxy by limiting its ability to form stars over millions of years and deserve more investigation when thinking about the factors that limit galaxy growth,” said Puglisi, a researcher at Durham University’s Center for Extragalactic Astronomy in Britain.

Observations by ALMA showed the gas being expelled from ID2299 is moving too fast to be explained by winds emanating from a black hole or a sudden burst of star formation.

Simulations showed even the biggest black holes couldn’t explain the loss of gas experienced by ID2299.

As is so often the case, researchers now suspect the newly identified phenomena — stunted stellar growth caused by galactic mergers — could be more common than they thought.

“Studying this single case unveiled the possibility that this type of event might not be unusual at all and that many galaxies suffered from this ‘gravitational gas removal’, including misinterpreted past observations,” said study co-author Jeremy Fensch.

“This might have huge consequences on our understanding of what actually shapes the evolution of galaxies,” said Fensch, a scientist with the Lyon Astrophysical Research Center in France.