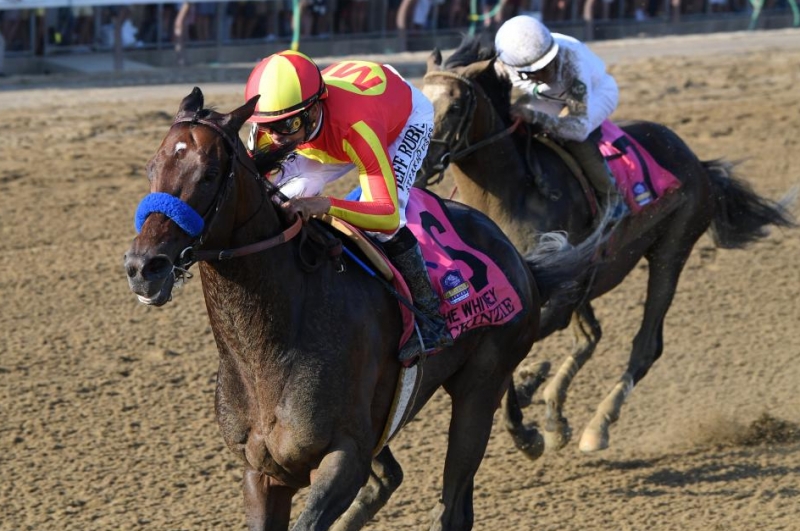 July 3 (UPI) — The Met Mile and some magnificent turf races at Belmont Park, last-chance hopes for some Kentucky Derby hopefuls at Los Alamitos and the return of Delaware Park top weekend horse racing in North America.

Bellafina is back in action at Los Al, exactly two years after she started her career on that track.

The Road to the Roses

Five-time Kentucky Derby-winning trainer Bob Baffert’s once bountiful supply of 2020 Derby contenders has dwindled sharply in the past month, thanks to injuries and retirements.

Then, as the waters got deeper, he was fourth in the Grade II San Felipe and 11th in the Grade II Oaklawn Handicap over a sloppy track in his most recent start, in April. He’s been working steadily at Santa Anita and carries Baffert’s hopes to win this for the fourth straight year.

Another in this short field who might be getting a last chance at Derby glory is Anneau d’Or. He was second in both the Breeders’ Cup Juvenile and the Los Alamitos Futurity but then has flopped in three tough chances this year.

The other three are two maiden winners and one still a maiden so if Thousand Words and/or Anneau d’Or can’t handle them, expectations will be adjusted.

The race offers 20 points for the winner on the “Road to the Kentucky Derby” leaderboard with 8, 4 and 2 points for the minor placings. Thousand Words is ranked No. 17 on the list with 25 points. Anneau d’Or is No. 20, with 22 points. Tiz the Law leads with 272.

Sunday’s $ 100,000 Iowa Derby at Prairie Meadows has a very well-matched field of six to go 1 1/16 miles. The oddsmaker has Shashashakemeup, a Shackleford colt, the 2-1 favorite but any of them seems possible. Trainer Steve Asmussen brings Billy Batts and Bill Mott sends Acre.

The Road to the Oaks

Piece of My Heart and Comical, the favorites in a field of eight, drew the inside gates for Saturday’s $ 300,000 Grade III Delaware Oaks.

Those two finished 1-2 in the Gardenia Stakes at Oaklawn Park May 1 with Piece of My Heart leading all the way and Comical unable to make up the difference.

Comical has the better overall record, including a second in the Grade I Chandelier at Santa Anita and a victory in the Grade III Schuylerville at Saratoga last summer. Three others enter after winning their last start but all will have to step things up a bit to figure here.

Strong Flag and Dynasty of Her Own top a field of seven for Sunday’s $ 100,000 Grade III Iowa Oaks at Prairie Meadows. The former, a Strong Mandate filly, has yet to beat winners.

Dynasty of Her Own, a daughter of Shanghai Bobby, comes from California where she won the California Oaks on the Golden Gate Fields all-weather track in her last start.

Chad Brown saddles three of the eight entered for Saturday’s $ 400,000 Grade I Manhattan at Belmont Park and all would be given a chance in a race with loads of talent.

Two of them — Instilled Regard and Devamani — were last seen finishing 1-2 in the Grade II Fort Marcy at 1 1/8 miles over the course. This is 1 1/4 miles. Brown’s third starter, Rockemperor, finished second in the Grade II Charlie Whittingham at Santa Anita last time out but was DQ’d to third.

Others in the Manhattan include the venerable Sadler’s Joy, who was third in this race in 2017 and second in 2018, and Channel Maker, a two-time Group 1 winner on the Belmont greensward who needs to turn around a slide.

Gufo, a Declaration of War colt trained by Christophe Clement, has won three straight, most recently the English Channel Stakes at Gulfstream Park, and is the 5-2 favorite on the morning line.

Vanzzy has won twice on all-weather tracks but hasn’t matched that on the grass. Pixelate has been in the frame in minor turf stakes at Aqueduct, Sam Houston, Fair Grounds and Churchill Downs.

Brown has two in Saturday’s $ 150,000 Grade III Poker at Belmont Park — both lightly raced 4-year-old colts and both with big chances.

Valid Point won his first three starts last year, including the Grade I Secretariat at Arlington Park, a day in which Brown swept all the stakes races on the card. He was 10th in the season finale at Keeneland and hasn’t been seen since.

Value Proposition takes a step up in class but was ultra impressive in his last start, earning a 100 Beyer Speed Figure in winning over the course and distance June 3. Got Stormy also is in here and if the 5-year-old mare can find her old form, she could show them all a thing or two.

Saturday’s $ 50,000 Christiana Stakes for 3-year-old fillies at Delaware Park has a field of nine to go 1 1/16 miles out of the infield chute. None is a standout although Pure Rhythm comes off a maiden win, by 11 lengths, at Tampa Bay Downs and Toolcat was a determined winner in her first start on the grass June 1, also at Tampa.

McKinzie, Vekoma and Code of Honor star in Saturday’s $ 500,000 Grade I Runhappy Metropolitan Handicap at Belmont Park. Better known as the “Met Mile,” the race is a “Win and You’re In” for the Big Ass Fans Breeders’ Cup Dirt Mile and drew a worthy field of eight.

McKinzie is a three-time Grade I winner and has earned more than $ 3.1 million. Code of Honor also is a Grade I winner — that the 2019 Travers at Saratoga.

Vekoma has won five of seven career starts and exits a 7 1/4-lengths win in the Grade I Carter, going 6 1/2 furlongs at Belmont Park. He earned a 110 Beyer Speed Figure for that.

Last year’s Belmont Stakes winner, Sir Winson, is back in Saturday’s $ 200,000 Grade II Suburban at Belmont Park. And perhaps it’s no coincidence that the field also includes the second- and third-place finishers from that race, Tacitus and Joevia.

Sir Winston has been less than impressive since the 10-1 upset in the Belmont and Joevia has been suffering through a long dull streak. Tacitus, by contrast, finished second in the Travers and third in the Jockey Club Gold Cup.

He started 2020 with a late-running fifth-place finish in the $ 20 million Saudi Cup and then was a credible fourth in the Grade II Oaklawn Handicap.

Mr Ritz, a 5-year-old, English-bred son of Oasis Dream, is the even-money favorite on the morning line for Saturday’s $ 175,000 (Canadian) Eclipse Stakes at on the Woodbine all-weather track.

Trained by Josie Carroll, Mr Ritz makes his first start since winning the Grade II Autumn Stakes at Woodbine last November. He was second in last year’s Eclipse. Carroll also saddles Avie’s Flatter, who was second in both the Queen’s Plate and Prince of Wales Stakes last year and third in the Breeders’ Stakes.

The Flatter colt was third in his 2020 debut in a Woodbine allowance event. Seven are set for this heat.

The 4-year-old Warrior’s Reward colt, trained by Brad Cox, was fifth in last year’s Iowa Derby. He won the Essex Handicap at Oaklawn Park early in that meeting before posting a dull, ninth-place showing in the Grade II Oaklawn Handicap May 2, his most recent outing.

Bellafina returns to action as the favorite in a field of seven for Saturday’s $ 200,000 Grade II Great Lady M. Stakes at Los Alamitos.

The 4-year-old Quality Road filly won last year’s Grade I Santa Anita Oaks and then suffered a raft of tough beats, including a second behind Covfefe in the Breeders’ Cup Filly & Mare Sprint. She finally was back in the winner’s circle after her most recent start, the Grade III Desert Stormer at Santa Anita.

The others in the Great Lady M. have more modest resumes although Hang a Star did jump up to finish second in the Desert Stormer at odds of almost 43-1. Zusha has been mixing it up in graded stakes but without winning.

Saturday’s $ 100,000 Grade III Victory Ride Stakes for 3-year-old fillies at Belmont Park drew five with Frank’s Rockette on the rail and likely to be well backed.

The daughter of Into Mischief has yet to miss a top-two finish in seven starts and was second in the Grade I Frizette over the course last autumn.

Saturday’s $ 75,000 Azalea Stakes for 3-year-old fillies at Gulfstream Park has a field of six with the outside filly, Boerne, the 6-5 favorite. The Texas-bred daughter of Fed Biz saw a three-race win streak snapped when she finished second in the Game Face Stakes over the same track June 6.

Six 3-year-olds are set to contest Saturday’s $ 75,000 Carry Back Stakes at Gulfstream Park — a real program-stabber. Double Crown, a Bourbon Courage gelding, is the narrow favorite with two wins from three previous starts.