This weekend will feature the second meteor shower in as many weeks as Earth passes through a trail of debris left behind by one of the most well-known comets in recent history.

The annual Eta Aquarid meteor shower will reach its peak on Saturday night into the early morning hours of Sunday, but the number of meteors visible to stargazers will depend on their location around the globe.

“This shower happens to be one of, if not the best, showers in the Southern Hemisphere and is a moderate shower for the Northern Hemisphere,” AccuWeather astronomy blogger Dave Samuhel said.

“From the equator northward, they usually only produce medium rates of 10-30 per hour just before dawn,” the International Meteor Organization said on its website. Meanwhile, those south of the equator can expect over 40 meteors per hour on the peak night.

“The meteors are most abundant in the hours leading up to dawn,” Samuhel added.

This year will be a particularly good year for the Eta Aquarids as the peak of the shower coincides with the new moon, meaning that dimmer meteors will be easier to see due to the lack of moonlight. 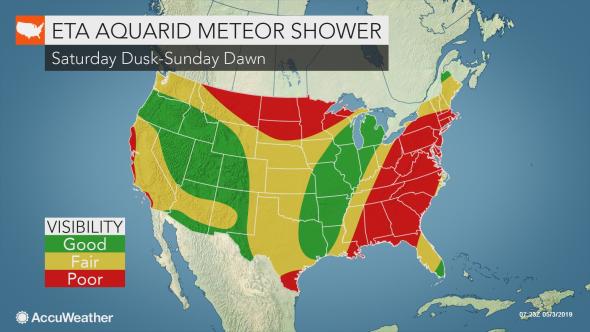 The best viewing conditions on Saturday night are expected across the Pacific Northwest, central Rockies and along a region from Michigan to eastern Texas where cloud-free conditions will bring uninterrupted views of the meteor showers.

Onlookers from Houston through St. Louis and Chicago are also forecast to have good viewing conditions, but light pollution from the cities may make it difficult to see many of the dimmer shooting stars.

Meanwhile, those across the eastern United States likely won’t be able to see this year’s Eta Aquarids due to a far-reaching storm spreading clouds and rain across the region.

Clouds and spotty showers may also hinder stargazers across the Upper Midwest and California.

The weather will improve across the eastern United States on Sunday night, allowing people to see some meteors despite the peak of the shower falling the night prior. 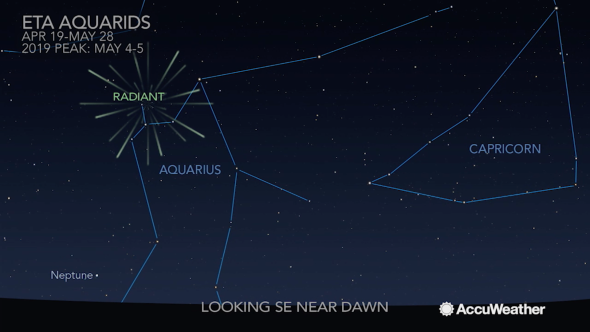 The origins of the Eta Aquarids can be traced back to debris and dust left behind by one of the most famous comets in recent times.

“The Eta Aquarids are one of two meteor showers sparked by Halley’s Comet,” Samuhel said. “The other being the Orionids in October.”

Meteors associated with the Eta Aquarids will radiate from the southeast; however, meteors will be visible in all areas of the sky, not just near the radiant point. In fact, focusing only on the radiant point will reduce the overall number of meteors you will see during the shower.

To see the greatest number of meteors, it is best to lie down in a lawn chair or on the ground and to take in as much of the night sky as possible. It is also important to be patient and let your eyes adjust to the dark. This means avoiding looking at any source of light for over 20 minutes, such as a cellphone or street light.

Folks that miss the Eta Aquarids will need to wait until the middle of the summer before meteors once again shower down from the cosmos.

The end of July will feature not one but two meteor showers that fall on the same night. The celestial double-header will take place on the night of July 29 into July 30 with the peak of the Southern delta Aquarids and alpha Capricornids.

These two meteor showers will bring a combined total of around 20 meteors per hour, according to the IMO, including some fireballs that could light up the entire sky.

“What is notable about [the alpha Capricornids] is the number of bright fireballs produced during its activity period,” the IMO said.