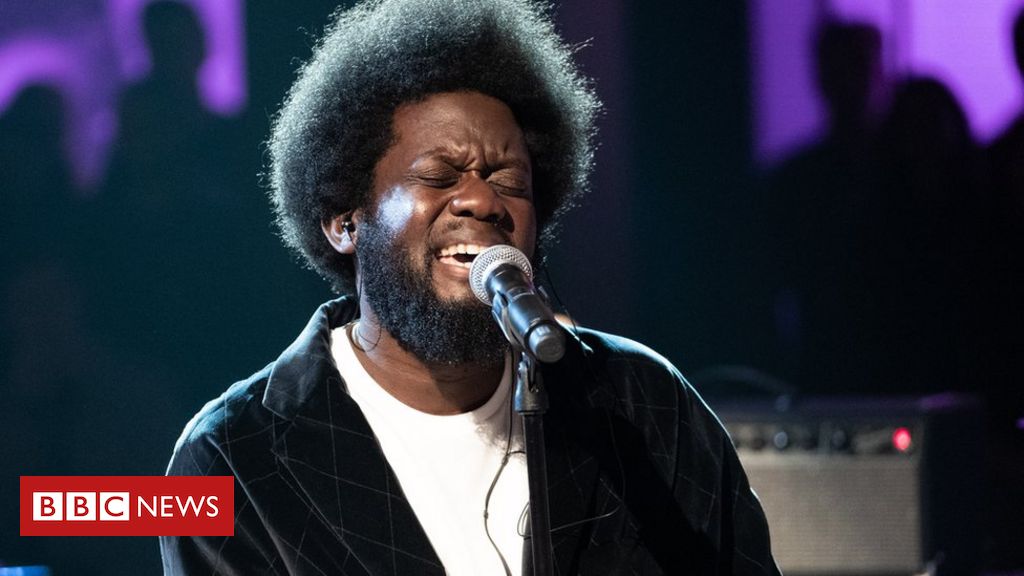 A lush, immersive album of politicised soul, it sees the star exploring themes of self-doubt, faith and civil rights.

Kiwanuka won on his third attempt, having been nominated for each of his previous albums: 2012’s Home Again and 2016’s Love & Hate.

“I was kind of resigned to the fact [that] if I don’t win one this year, probably I’ll never win one,” he told BBC 6 Music.

Kiwanuka’s victory was revealed by Radio 1’s Annie Mac on The One Show, after Covid-19 restrictions made the traditional award ceremony impossible.

The DJ, who was on the judging panel alongside the likes of Jamie Cullum and Jorja Smith, said it had been a “unanimous” decision.

“I don’t think any of the judges walked away unhappy,” she said. “Everyone felt the same thing about this album, which is that it thoroughly deserved to win the prize.”

Kiwanuka, whose Ugandan parents escaped Idi Amin’s regime to settle in Muswell Hill, London, is a former session musician who dropped out of the Royal Academy of Music to become a solo artist.

He first came to attention after supporting Adele on her 2011 tour and winning the BBC’s Sound of 2012. He released his debut album, Home Again, later that year.

The musician cemented his reputation with 2016’s Love & Hate, which made him a star in the US when the opening song, Cold Little Heart, became the theme tune to the TV series Big Little Lies.

Despite his success, his latest album emerged from a period of crippling self-doubt.

“I’ve always had imposter syndrome,” he told the BBC last year. “I was always waiting for someone to find me out.

“But about a year and a half ago, I got tired of that way of thinking. I just went, ‘This isn’t helping anyone, least of all me.'”

The result was Kiwanuka’s opening track, You Ain’t The Problem, on which the musician vows to stop getting in his own way, singing: “I used to hate myself / You got the key / Break out the prison.”

The record continues as a song cycle where Kiwanuka’s own experiences and fears are interwoven with samples of civil rights campaigners and reflections on racial politics.

On the psych-rock soliloquy Hero, he compares the murder of 1960s Black Panther activist Fred Hampton with recent US police shootings. Exasperated, he turns to God for answers on the call-and-response coda of I’ve Been Dazed.

It is the latest album reflecting the experiences of young black Britons to be chosen by Mercury judges. Kiwanuka is the fifth black male solo artist to win the award in the past six years. Rapper Dave won for Psychodrama last year.

The musician was the bookies’ favourite to win, followed by Laura Marling, who has now been passed over four times.

Announcing the winner on The One Show will undoubtedly gave Kiwanuka’s record extra exposure. The prime-time BBC One programme regularly attracts three million viewers, compared with the 155,000 who tuned in to last year’s final on BBC Four.

Mac explained that Kiwanuka had been informed of the result before the show, so that he could be invited to the studio.

However, she shared a video of the moment she ambushed him with the news, as he was on his way to be interviewed by Jools Holland.

The star will celebrate his victory on a special edition of Later… With Jools at 22:00 BST on Friday night.

The full 2020 Mercury Prize shortlist was:

The shortlist was praised for highlighting female artists, who outnumbered men for the first time in the prize’s 29-year history.

But organisers came under fire for excluding British-Asian artist Rina Sawayama because she does not hold a British passport.

After the singer said she was “heartbroken” by the decision, the BPI, which organises both the Mercury Prize and the Brit Awards, said it would review its eligibility criteria.