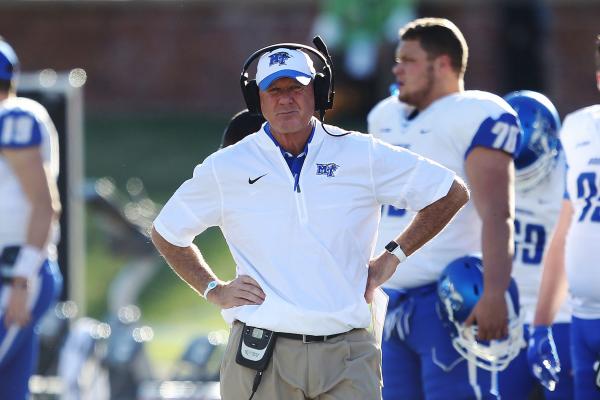 The last time Middle Tennessee State played Arkansas State was five years ago when they were both in the Sun Belt and Auburn coach Gus Malzahn was involved.

That was the last season Malzahn spent as Arkansas State’s head coach. He led the Red Wolves to a 45-0 win over Middle Tennessee State in a game that clinched the Sun Belt title.

The former rivals meet again in the Camellia Bowl on Saturday at Montgomery, Ala. Middle Tennessee State (6-6) is now in Conference USA while Arkansas State (7-4) remains a Sun Belt power.

“Our students, our fans, we have to go to this game. We have to,” Middle Tennessee State coach Rick Stockstill said.

The Blue Raiders were the only Conference USA team to face three Power Five opponents this season. They were one of only two teams from the conference to secure a win against a Power Five team when they upset Syracuse 30-23 on Sept. 2.

Middle Tennessee State overcame mounting injuries to become bowl eligible. Junior quarterback Brent Stockstill, the coach’s son, was out with an injury for an extended period (six games), as was wide receiver Richie James and other receivers and several offensive linemen.

“I don’t think there’s ever been a year like this,” Rick Stockstill said. “What we accomplished this year with everything we’ve gone through, from who we played to the injury situation to a couple of close losses, I’m just so happy and proud of this team.”

The Blue Raiders have miss a combined 125 games due to injury. Only four players played and started every game in the regular season.

Anderson is the first head coach in Arkansas State history to win 31 or more games over his first four seasons at the school. He had been rumored as a candidate for job openings with Arkansas and Ole Miss.

“The kids deserved some continuity and stability in general,” Anderson said in regard to Harsin, Malzahn and Freeze having a short stay at Arkansas State. “We believe in what we’re doing here, and the job’s not done yet.”

A school-record 19 Arkansas State players earned some sort of Sun Belt all-conference recognition, including senior Blaise Taylor as both a first-team defensive back and third-team return specialist.

Rolland-Jones is second in the nation with 1.18 sacks per game. He became the third player to win the Sun Belt’s top honor in consecutive seasons, the first since Arkansas State quarterback Ryan Aplin won in 2011 and 2012.

“It’s a wonderful feeling,” said Rolland-Jones, who is also seventh in the nation with 1.7 tackles for loss per game. “It’s a blessing. I’m just thankful God put me in this position.”