The pair finally decided to tie the knot in December 2018 after almost ten years of on and off dating.

A representative for the Wrecking Ball singer told People: “Liam and Miley have agreed to separate at this time.

“Ever-evolving, changing as partners and individuals, they have decided this is what’s best while they focus on themselves and careers.

“They still remain dedicated parents to all of their animals they share while lovingly taking this time apart. 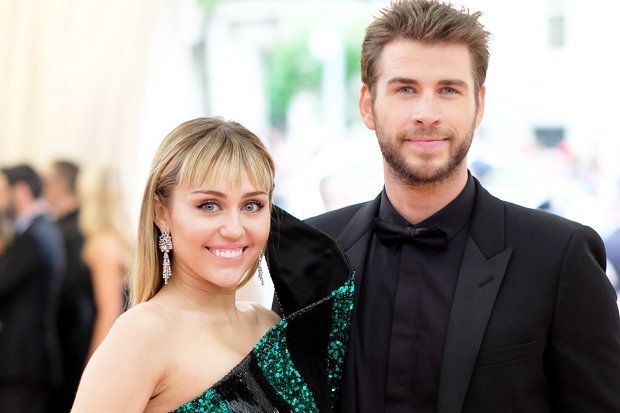 SPLIT: Miley Cyrus and Liam Hemsworth have broken up after less than a year of marriage (Pic: GETTY)

LONG-TERM: The couple had been dating on and off for ten years (Pic: GETTY)

Cyrus, 26, and 29-year-old actor Hemsworth haven’t made any public statements since news of the split came through.

Earlier this month, Miley described her relationship with the hunky Australian as “unique”.

In an interview with Elle, she said: “I think it’s very confusing to people that I’m married.

“But my relationship is unique. And I don’t know that I would ever publicly allow people in there because it’s so complex, and modern, and new that I don’t think we’re in a place where people would get it.”

In her most recent Instagram story on Saturday, Miley shared a picture of herself and older sister Brandi with face masks.

“Much needed quality time with big sis,” she captioned the snap cryptically.

It comes after Miley was snapped snogging Brody Jenner’s ex-wife Kaitlynn Carter during a girl’s holiday to Lake Como, Italy.

This morning, blogger Kaitlynn shared a video on her Instagram story of her and Miley on their Italian getaway.

MISSING: On Saturday, Miley shared a picture of herself without her wedding ring (Pic: INSTAGRAM/MILEYCYRUS)

DISTANT: Miley and Liam last shared a picture of themselves together in early June (Pic: INSTAGRAM/LIAMHEMSWORTH)

On Saturday, Miley shared a snap of herself in Italy posing on a chair without her wedding ring.

Fans quickly noticed the absence, with one commenting: “She’s not wearing her ring wtf!??”