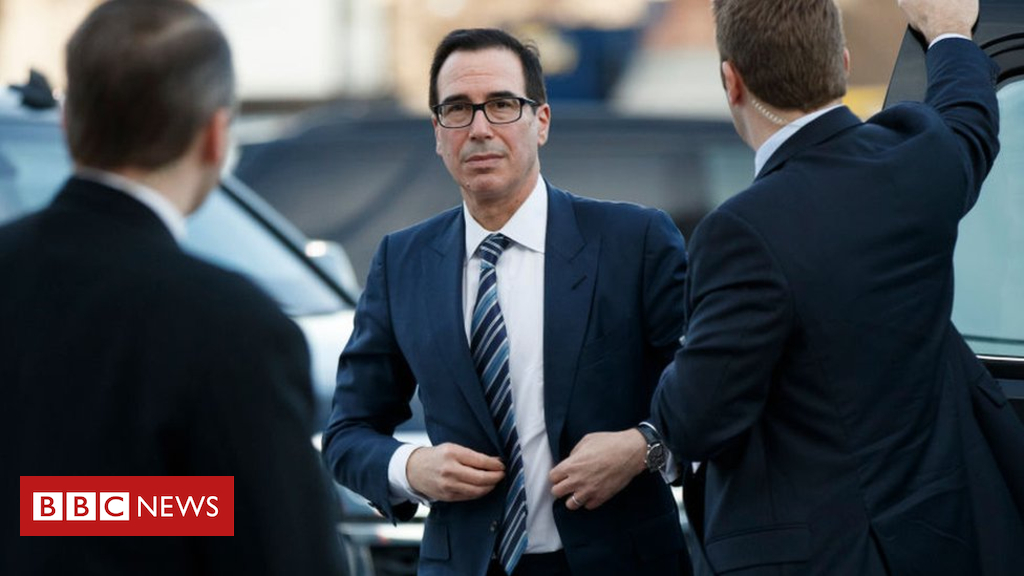 US Treasury Secretary Steven Mnuchin has made calls to the heads of the country’s six largest banks, in an unusual move aimed at reassuring investors after big falls in US stocks.

Last week, US stocks suffered one of the worst weekly falls in a decade, as an interest rate rise and US-China trade tensions rattled markets.

It also comes amid a partial government shutdown over spending plans.

“The [bank’s chief executives] confirmed that they have ample liquidity available for lending to consumer, business markets, and all other market operations,” the Treasury said in a statement attached to a tweet from Mr Mnuchin.

“[Mr Mnuchin] also confirmed that they have not experienced any clearance or margin issues, and that the markets continue to function properly,” the Treasury’s statement said.

The BBC Today programme’s business presenter, Dominic O’Connell, said the statement was “very odd” and could “spook markets, not reassure them”.

“People are wondering whether this is really a role for the US Treasury secretary,” he said.

“More than anything else right now, Washington and politics are absolutely driving investor sentiment and market direction and that can turn on a dime,” said Oliver Pursche, a board member at Bruderman Asset Management.

The US Treasury secretary tweeted that he had spoken to the president, who insisted he “never suggested firing” Mr Powell and did not believe he had the right to do so.

Rick Meckler, partner at Cherry Lane Investments, said the fact that Mr Mnuchin had said the White House did not have the power to remove Mr Powell, rather than saying it did not want to remove him, would be more comforting for investors.

“The administration hasn’t been all that stable when it comes to changing their mind. Politically, these are very strange times,” he said.

All three US indexes closed lower last week, with the technology-focused Nasdaq down 20% since its peak, placing it in so-called “bear market” territory.

US investors are worried about a range of factors including slowing economic growth at home and internationally.

In addition, a partial US government shutdown began at midnight on Friday after opposition Democrats resisted President Donald Trump’s demand for $ 5bn (£4bn) for his Mexico border wall.

The shutdown over budget spending could continue right up to the opening of the next Congress on 3 January.

Mr Mnuchin is now set to meet with the President’s Working Group on Monday, the Treasury statement said.

The group includes market regulators and Federal Reserve governors, among others. They will discuss “coordination efforts to assure normal market operations”, the statement said.