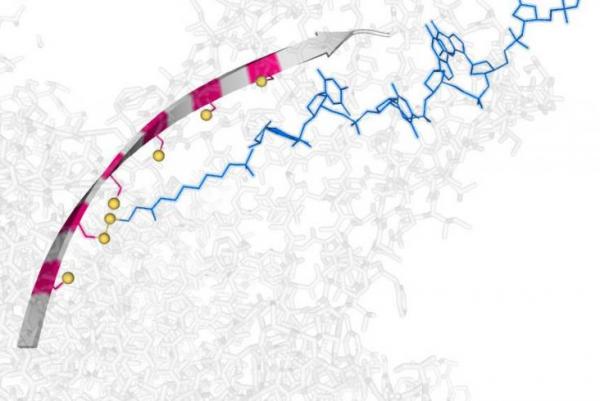 The hopper moves along a nanoscale track. Its locomotion is made possible by the making and breaking of simple chemical bonds. In lab tests, the hopper successfully carried single strands of DNA through a protein nanotube.

The breakthrough could inspire the next generation of gene editing technologies.

“Being able to control molecular motion is the holy grail of building nanoscale machines,” Hagan Bayley, a professor of chemistry at Oxford University, said in a news release. “Being able to process single molecules of DNA under precise chemical control may provide an alternative to the use of enzymes in DNA sequencing technologies, improving their speed and the number of molecules that can be analyzed in parallel.”

The miniature hopper moves along a track made of cysteine residues. Cysteine is a type of amino acid. Scientists threaded the track through a membrane-lined nanotube. The membrane carried an electric field. The current controls the making and breaking of chemical bonds, triggering the movement of the molecular hopper.

The hopper was designed specifically to carry cargo.

“Cargos were attached to a carrier motor, and their position and chemical identity read out from changes in the current through the pore,” scientists explained in their newly published paper. “These features enabled repeat observations of a single molecule as it moved back and forth on the track.”

The molecular hopper’s movement is described as “ratcheting.” The process could prove useful to future molecular machine technologies, especially technologies used for DNA and RNA sequencing.