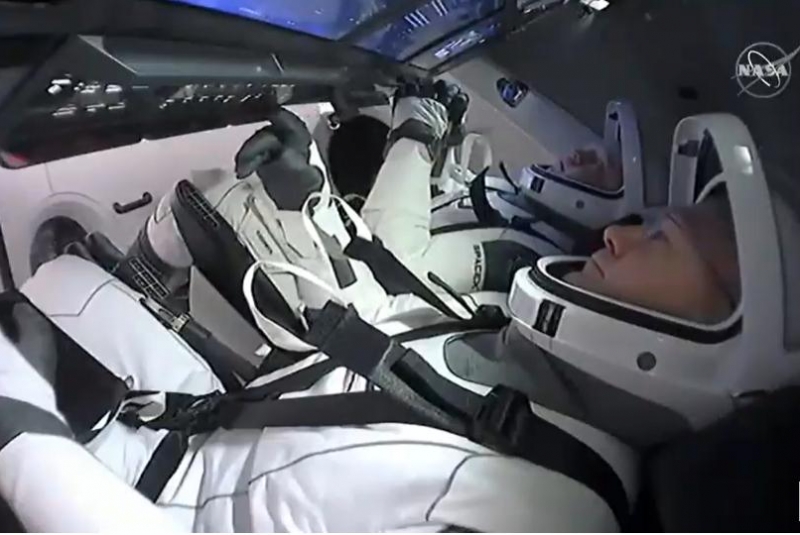 Aug. 2 (UPI) — Two NASA astronauts splashed down in the Gulf of Mexico on Sunday afternoon, completing a two-month mission that sent them to the International Space Station to test SpaceX‘s groundbreaking Crew Dragon shuttle capsule.

Astronauts Doug Hurley and Bob Behnken landed gently in the Endeavour capsule off Pensacola, Fla., at 2:48 p.m. EDT, assisted by two sets of parachutes that slowed the descent. A crew from the SpaceX Go Navigator hoist the capsule onto the vessel.

The crew was delayed from leaving the capsule initially because technicians detected unacceptable levels of dinitrogen tetroxide, one of the two fuels used in Crew Dragon, coming from the service section of the capsule.

That section is sealed off from the area in which the astronauts ride, but engineers purged the gas to reduce the chance of the two men breathing toxic fumes.

Behnken emerged from the capsule at 4:08 p.m. EDT, and was taken by stretcher — a routine procedure — to the ship’s medical quarters for a checkup by the NASA medical team. Hurley emerged two minutes later and also was taken for a checkup.

They were to be flown by helicopter to Pensacola Naval Air Station, transfer to a NASA aircraft and depart for Houston and family reunions.

The astronauts undocked from the space station at 7:30 p.m. EDT Saturday and left Earth orbit at 1:56 p.m. EDT Sunday.

The original landing site was in the Atlantic Ocean near Kennedy Space Center, but splashdown would have occurred around the time Tropical Storm Isaias was due to arrive along central Florida’s east coast.

Had the site off Pensacola proved troublesome, NASA and SpaceX chose one off Panama City, Fla., as a backup.

Sunday’s re-entry marked the first splashdown of a U.S. space capsule carrying astronauts since the Apollo-Soyuz Test Project, the American half of which was launched from Kennedy Space Center in 1975. That was the final flight of the Apollo spacecraft.

Crew Dragon traveled as fast as 17,500 mph after re-entering the atmosphere, but that slowed to 16 mph just before splashdown in an area with 1-foot waves and virtually no wind.

The astronauts traveled for more than 19 hours in the capsule, and could have stayed aboard Endeavour in the Gulf for two days had a problem occurred with their recovery. They made 1,024 orbits during the mission, all but a few on the space station.

The SpaceX mission was called a demonstration flight, which is the final step toward certification of the SpaceX capsule for regular trips to the space station.

Behnken completed four spacewalks while aboard the space station. The mission had been planned to last just five days, but it was extended so Behnken could help finish a years-long project to upgrade the power system.

No issues with the capsule have been reported. After the apparent success with this test flight NASA plans to launch another SpaceX capsule to the space station in late September, officials said.

Crew members for that mission are to be NASA astronauts Mike Hopkins, Victor Glover and Shannon Walker, along with Soichi Noguchi from the Japan Aerospace Exploration Agency.

Over the past decade, NASA had to rely on Russian Soyuz rockets and capsules to send its astronauts to the space station, at a cost of more than $ 70 million per seat.