July 1 (UPI) — NASA concluded a spacewalk of 6 hours and 1 minute on Wednesday to replace aging batteries on the International Space Station.

Three hours into the spacewalk, which started around 7:20 a.m, NASA reported that Wednesday’s battery work was completed. The astronauts also prepared the outside of the space station for the next spacewalk later this month, which is to replace more batteries.

The new batteries installed on Friday and Wednesday “are up and running and storing power,” a NASA spokesman said.

Behnken and astronaut Doug Hurley arrived at the space station May 31 as part of the historic return to human spaceflight from U.S. soil. The mission marked the first time SpaceX carried people into space.

NASA extended the historic trip to space, which was originally a brief five-day demonstration, by months to ensure the battery replacement in a timely manner.

The battery replacements will “put the station in a much better configuration long term,” said Kenneth Todd, the space station’s manager for integration and operations, during a press conference leading up to the spacewalks.

“I think it’s safe to say, barring any unforeseen type of failures, we will be good on batteries for a number of years to come,” Todd said.

During their previous spacewalk on Friday, Behnken and Cassidy spent 6 hours, 7 minutes in space, working on battery replacement.

The space station is powered largely by solar energy stored in the batteries. The new batteries provide an improved and more efficient power capacity, according to NASA.

On Wednesday, Cassidy and Behnken removed an aging nickel-hydrogen battery, which was placed into an external storage unit. They installed a new lithium-ion battery and then rerouted electrical and ethernet wiring.

Early in Friday’s spacewalk, a small mirror detached from Cassidy’s spacesuit and floated away slowly — joining millions of pieces of space trash circling the planet, usually at high speeds. But NASA said the lost object posed no threat to the spacewalk or the space station.

Astronaut Hurley was on duty inside the space station to help the spacewalkers in and out of their spacesuits and monitor the outing. Russian cosmonaut Ivan Vagner assisted the NASA trio.

As they plan and execute spacewalks, the astronauts on the space station also evaluate how SpaceX’s Dragon capsule functions while attached to the structure.

“Dragon is generating more power than we predicted, so we should have 114 or more days” in space, said Steve Stich, manager of NASA’s Commercial Crew Program, during the spacewalk press conference.

Hurley and Behnken could return to Earth in a final test of SpaceX’s Crew Dragon capsule as early as Aug. 2, Stich said. 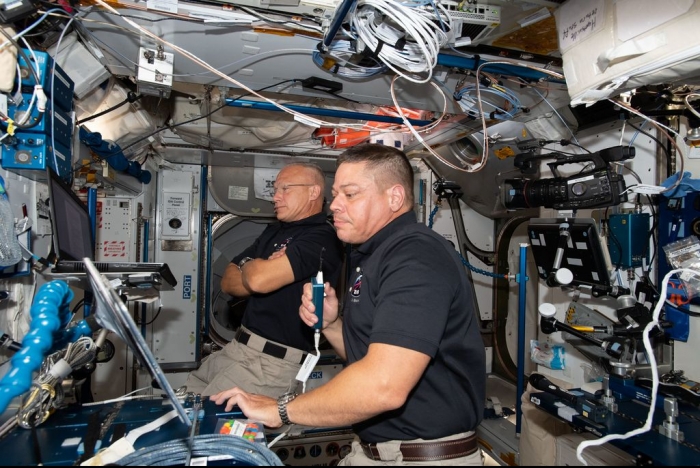