ORLANDO, Fla., Jan. 27 (UPI) — NASA will spend the next three weeks preparing its biggest and most sophisticated Mars rover, Perseverance, to make a dangerous seven-minute landing Feb. 18 on the Red Planet.

At stake is a multinational effort to find evidence of life on Mars and the planned return of rock samples the rover will drill out of the Martian surface.

The rover and its landing system have an updated system called terrain relative navigation. The last NASA rover mission to Mars, Curiosity in 2012, had a similar system, but Perseverance’s is better — using its computer brain, maps and cameras to pick a safe landing site, said Allen Chen, a lead engineer on the mission.

The landing process “is replete with danger,” Chen said in a briefing for the media Wednesday. “There’s sand traps, boulders, there are craters — all these would be a very bad day without the new technologies we’ve added.”

Perseverance has parachutes, but those only slow it to 150 mph — the same velocity as a skydiver whose parachutes fail, Chen said.

Like Curiosity, Perseverance’s jet pack — called Sky Crane — will fire thrusters, slowing it to only a few miles per hour. The crane will release the rover a few feet above the surface and then fly to a safe distance before crashing.

In the next few weeks, NASA plans to remotely wipe the rover’s memory of data from its seven-month spaceflight to Mars, said Matt Wallace, the agency’s deputy project manager for the mission.

Wiping the rover’s memory also allows NASA to give the robotic explorer “the best information of where she is” to make the entry into the Martian atmosphere, Wallace said.

The rover determines when to deploy the parachute, and its precise landing location. The landing is in an area called Jezero Crater, but the target location is known as Timanfaya, after a national park in the Canary Islands.

All such features have been named after national parks on Earth.

“Basically, in that last week, it’s all about making sure that we’re all primed and best positioned to succeed,” Wallace said.

The mission was launched from Kennedy Space Center in Florida on July 30. Once the craft lands, it will require months of testing before setting off on a 15-mile pathway NASA has plotted.

NASA is proud of delivering the rover on time despite the pandemic, said Thomas Zurbuchen, associate administrator of NASA’s science mission directorate.

“While we are all eagerly awaiting the next month when Perseverance safely lands on the Red Planet,” Zurbuchen said. “it is not guaranteed that we will be successful. It’s very hard.”

The mission after landing

After Perseverance touches down and goes through testing, the rover will begin to look for previously habitable sites and rocks that formed in water, which could hold traces of organic compounds or even existing microbes, if any exist on Mars.

Perseverance is outfitted with a pair of robotic arms, nine drill bits, a rotating storage carousel and 43 metallic tubes that will be used to target, extract and seal rock and sediment samples for future study inside laboratories on Earth.

A pair of imaging instruments, Mastcam-Z and SuperCam, will aid the hunt.

The Mastcam-Z and its variable-zoom eyes will capture panoramic and stereoscopic 3D color images in high resolution, while the rover’s SuperCam will deploy a laser to vaporize rock and study its contents with visible near-infrared light.

Once scientists identify a rock of interest, Perseverance will drill into it and obtain a core sample about 2 inches long.

The robotic instruments on the rover will then seal the sample in a tube and place it in a storage rack on board. The rover then will transport the tube until mission control commands it to deposit the container on the Martian surface.

“Perseverance is the very first rover to seek signs of past microbial life by collecting and caching rock and soil samples that will be returned to Earth by future missions,” said Lori Glaze, director of NASA’s Science Mission Directorate’s Planetary Science Division.

The main reason Perseverance is bigger and heavier than its predecessors is because NASA packed 50 percent more scientific payloads onto the six-wheeled vehicle, including the Sample Caching System.

“We’ve built probably the most complex mechanized system in the history of the Mars program, and we’ve taken some big challenges before,” Wallace said.

The heart of the Mars 2020 scientific mission is the Sample Caching System, but the rover is also carrying a variety of other scientific payloads.

This includes several different cameras, a combination of microphones and a sophisticated weather station, all of which will provide unprecedented documentation of the rover’s journey.

The suite of instruments and sensors will provide scientists a fuller sense of what life on the Martian surface is like — what it looks, sounds and feels like — a perspective that will help NASA prepare for future human missions to Mars.

While the Mars 2020 team has placed great emphasis on the search for ancient life, mission scientists are confident that their efforts will pay dividends for decades to come with or without evidence of ancient microbes.

“It would of course be a fabulous scientific discovery to find that life existed beyond Earth,” said Ken Farley, Mars 2020 project scientist and Caltech researcher. “But even if we don’t find evidence of life, that would be important, too.”

Even if scientists fail to find the chemical signatures of ancient life inside the crater’s layers of rock and sediment, they will surely find — with the help of Perseverance’s instruments — evidence of ancient climate conditions.

For each geological and astrological revelation made on site, researchers expect the Mars 2020 mission to ultimately yield many more breakthroughs back on Earth.

That’s because, for the first time, Martian rock and sediment samples will be returned to Earth.

NASA and the European Space Agency are planning a future Mars mission for the collection and return of the samples cached by Perseverance to Earth, with a possible launch slated for 2026.

Earlier this week, President Joe Biden requested the delivery of one of the lunar rock samples returned by the Apollo 11 mission for display in the Oval Office — a symbol, NASA officials said, of the new administration’s commitment to the space agency’s efforts to return humans to the moon and ultimately put astronauts on the Red Planet.

Glaze said that in a few decades, after Martian samples have fueled dozens of planetary science investigations in laboratories across the globe, a future president might request to display a rock returned by Mars 2020 in the Oval Office.

“But first we have to bring them back to Earth,” she said.

Exploration of Mars through history 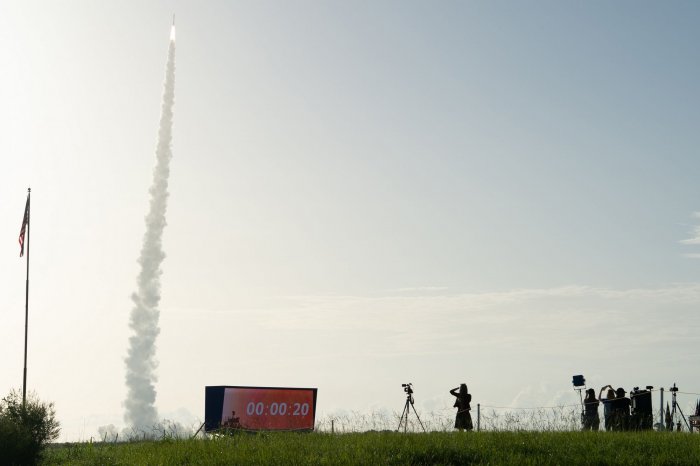 A United Launch Alliance Atlas V rocket lifts off at 7:50 a.m. July 30 from Complex 41 at the Cape Canaveral Air Force Station, Fla. On board are NASA’s Perseverance rover and Ingenuity, a helicopter designed to fly on the Red Planet. They are expected to arrive on Mars in February. Photo by Joel Kowsky/NASA | License Photo