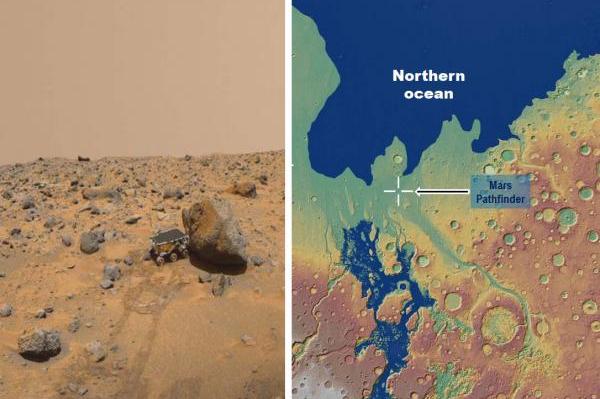 NASA sent Pathfinder to investigate. In 1997, Pathfinder reached the Red Planet. It set up a base station, eventually named the Carl Sagan Memorial Station, and sent out a small rover named Sojourner to explore the landscape.

Sojourner identified an array of fluvial features consistent ancient flooding. However, the rover’s data suggested the ancient floods were much shallower than scientists estimated. As a result, scientists on the Pathfinder mission were unable to rule out the possibility that debris or lava flows shaped the Red Planet’s channels.

Scientists have previously mistakenly blamed hydraulic mechanisms for sediment patterns created by terrestrial sources. Still, the evidence that water once flowed freely on Mars is considerable.

For the latest study, researchers at the Planetary Science Institute reconsidered the evidence.

“Our paper shows a basin, with roughly the surface area of California, that separates most of the gigantic Martian channels from the Pathfinder landing site,” Alexis Rodriguez, senior scientist at PSI, said in a news release. “Debris or lava flows would have filled the basin before reaching the Pathfinder landing site. The very existence of the basin requires cataclysmic floods as the channels’ primary formational mechanism.”

Scientists contend large floods on Mars would have created an inland sea. The evidence of that inland sea can be found in the observations made by Sojourner. The rover’s data suggests Pathfinder landed on marine spillway that formed a land barrier between the ocean and inland sea.

“Our simulation shows that the presence of the sea would have attenuated cataclysmic floods, leading to shallow spillovers that reached the Pathfinder landing site and produced the bedforms detected by the spacecraft,” Rodriguez said.

In addition to offering clarity to the discoveries made during NASA’s first Martian rover mission, the latest research — published this week in the journal Scientific Reports — could guide future Martian missions.

“Unlike on Earth, this sea was likely groundwater fed,” Rodriguez said. “If the ancient source aquifers hosted life, the proposed marine sedimentary materials at the Pathfinder landing site might contain a record of that life, a location easily accessible by future missions.”