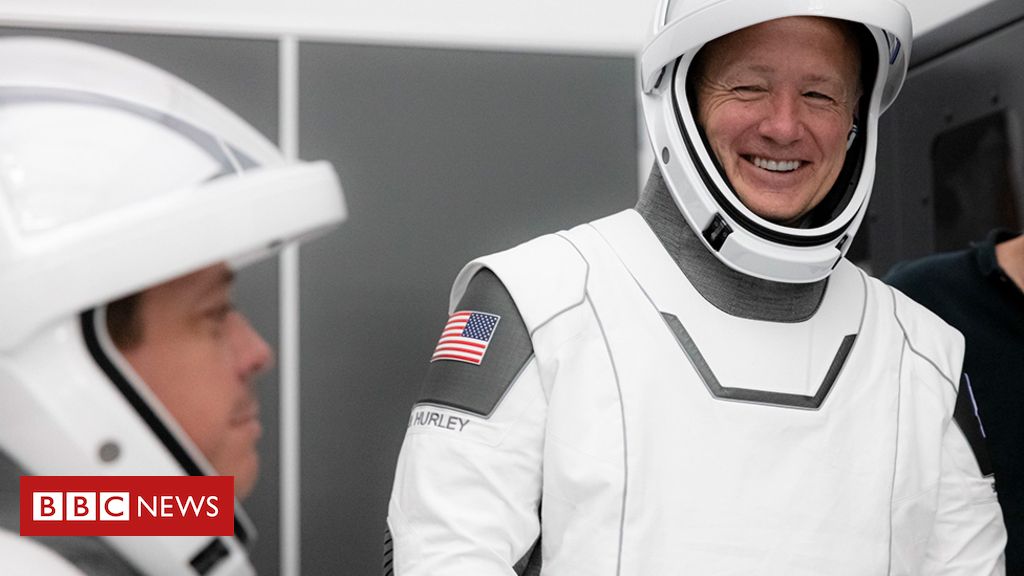 Key officials at the American space agency (Nasa) and private launch firm SpaceX have signed off next week’s historic mission to the space station.

Astronauts Doug Hurley and Bob Behnken will ride to orbit from Florida – the first time in nine years that humans have left Earth from US territory.

A review panel has found no technical reason to delay the mission.

The decision of the Flight Readiness Review (FRR) panel opens the way for final launch preparations to proceed.

“We did a thorough review of all the systems and all the risks, and it was unanimous on the board that we are ‘go for launch’,” said Stephen Jurczyk, Nasa’s associate administrator, who chaired the FRR.

Already, the Falcon has been rolled out to the Kennedy Space Center’s Launch Complex 39A, and lifted into the vertical.

The transfer on Thursday allowed SpaceX engineers to conduct a static fire on Friday. This saw the vehicle ignite briefly all nine of its engines to confirm their operational status.

Clamps held the booster to prevent it moving in the test.

Another important pre-launch moment occurs on Saturday with the “Crew Dry Dress”. This involves Hurley and Behnken getting into their spacesuits and rehearsing all the actions they must take next Wednesday, including strapping themselves into the Dragon capsule.

The attention to detail is all about making this mission as safe as possible.

“Our teams are scouring and thinking of every single risk that’s out there, and we’ve worked our butt off to buy down the ones we know of. And we’ll continue to look and continue to buy them down until we bring [Hurley and Behnken] home,” said Kathy Lueders, who manages Nasa’s Commercial Crew Program.

There is huge focus on this mission. Not since the retirement of the space shuttles in 2011 has America been able to launch its own astronauts to the space station – a task that has rested solely with Russia and its Soyuz rocket and capsule system.

Nasa’s Commercial Crew Program, initiated just prior to the end days of the famous winged orbiters, sought to incentivise a new human transportation industry in the US.

The agency proposed to purchase launch services off private companies and gave them seed money to help develop their hardware.

SpaceX, run by the tech entrepreneur Elon Musk, is the first of the commercial operators to deliver a working system. The aerospace giant Boeing is some way behind in its progress, but should eventually match the SpaceX milestones.

For Nasa, this approach of contracting out astronaut transportation to low-Earth orbit has saved it many billions of dollars. The old way of doing things, which required the agency to purchase, own and operate its space vehicles, proved to be very expensive.

From now on, Nasa will simply buy seats in what are essentially private taxi services. Cash that’s freed up can then be diverted to more complex endeavours such as preparing to take astronauts back to the Moon and on to Mars.

“It’s been estimated that this programme overall will have saved Nasa maybe $ 30bn-40bn at least,” observed Benji Reed, director of crew mission management at SpaceX.

“Firm, fixed-price contracts and the kind of truly open partnership where we work together allows that kind of saving to happen and that kind of ability to allow Nasa to invest in more things and do other programmes.”