ORLANDO, Fla., May 30 (UPI) — NASA and SpaceX will battle storm clouds again in Florida on Saturday during what could be the second attempt in four days to launch astronauts to the International Space Station.

Elon Musk’s SpaceX aims to be the first private company to launch astronauts into orbit, while NASA hopes Saturday will mark a return to human spaceflight from U.S. soil for the first time in nine years.

At the scheduled liftoff time of 3:22 p.m. EDT, there will be 50 percent chance of poor launch weather, according to the U.S. Space Force forecast.

Because timing is everything in catching up to the space station, the launch must occur precisely on time. There is no wiggle room for even the slightest delay.

Storm clouds and precipitation are likely, which are the same conditions that forced a postponement of the launch Wednesday afternoon.

NASA and SpaceX launch controllers met for more than an hour Friday afternoon to determine whether to move ahead with the mission Saturday or wait another day or longer for better weather.

In the end, they could not decide, and planned to reassess conditions Saturday morning.

After Wednesday’s scrub, astronaut Doug Hurley posted thanks to SpaceX and NASA teams on Twitter after he spent three hours in the Crew Dragon capsule atop the rocket waiting for launch.

“It can be frustrating, but also a very real part of getting to space sometimes,” he tweeted, adding, “We go again Saturday!”

On Friday, his partner on the planned flight, Bob Behnken, tweeted that “Scrubs are part of conducting spaceflight safely and successfully. … We’re ready for the next launch opportunity!”

If Saturday’s launch postponed, a launch Sunday would be a possibility, with the probability of violating weather constraints dropping slightly to 40 percent. NASA hasn’t announced potential launch dates beyond that.

NASA Administrator Jim Bridenstine praised Wednesday’s attempt as a flawless rehearsal. The countdown proceeded without a hitch until the weather forced a halt minutes from liftoff.

Hurley and astronaut Bob Behnken will launch atop a Falcon 9 rocket, which has proven to be a reliable workhorse for carrying supplies to the space station 250 miles above Earth.

President Donald Trump and Vice President Mike Pence traveled to the space center Wednesday, but it was not clear whether either would return this weekend.

“I want to thank everybody down here. And this is something the first lady and I looked very much forward to seeing. And in a short while, that’s going to be a liftoff,” Trump told Bridenstine and Musk before the countdown was called off.

Musk, speaking to family members of both astronauts on Wednesday, said he felt a strong sense of responsibility for their safety.

“I said we’ve done everything we can to make sure your dads come back OK,” he recalled telling each astronaut’s only child Wednesday before the launch was called off.

Once launched, the capsule would head east over the Atlantic Ocean and toward the United Kingdom, where viewers might see it 15 or 20 minutes after liftoff, according to the website MeteorWatch.org.

At the 12-minute mark after liftoff, the Crew Dragon capsule is designed to separate from the second-stage booster and the capsule’s nose cone would open to prepare for docking at the space station.

After the capsule reaches the same altitude as the space station and catches up to it, Crew Dragon will inch closer and dock slowly. The capsule can dock autonomously, but Hurley will demonstrate flying it manually for a brief test.

The spacecraft would arrive at the space station Sunday, with docking planned for 10: 29 a.m. EDT. Hurley and Behnken are to remain in the capsule for almost two hours as it is locked in place and checks are made on its systems.

During the mission, called Demo 2, Behnken and Hurley will conduct final tests of the Crew Dragon capsule before it is certified for regular ferry service to the space station.

One of the biggest tests will be flying the capsule manually for brief periods, using Crew Dragon’s touchscreen controls.

“We’ve longed to be a part of a test mission, a test spaceflight,” Behnken said during a brief press conference Friday. “It’s something we dreamed about, flying something other than the space shuttle” to carry people into space.

If the mission ultimately is successful, NASA plans to launch another SpaceX capsule to the space station Aug. 30, Bridenstine, the NASA administrator, said Tuesday.

The return to Earth for the Demo 2 mission would mark the first splashdown of a U.S. space capsule carrying astronauts since the Apollo-Soyuz Test Project in 1975.

The two men share similar life experiences. Both are married to female astronauts who have traveled into space, and both have one child. Both were military test pilots and hold the rank of colonel — Behnken with the U.S. Air Force and Hurley with the U.S. Marine Corps.

Behnken, originally from the St. Louis area, was a former chief of NASA’s Astronaut Office. Hurley, originally from upstate New York, flew on the last shuttle mission in 2011 and was the first Marine pilot to fly the F/A‐18 E/F Super Hornet.

SpaceX’s Falcon 9 rocket is the first orbital launch vehicle to be fully reusable, although the rocket for this launch is new.

NASA has urged the public to watch the launch on TV or online, while the agency restricts access to the launch site at Kennedy Space Center to essential personnel only during the COVID-19 pandemic.

Astronauts poised to return to space from U.S. soil 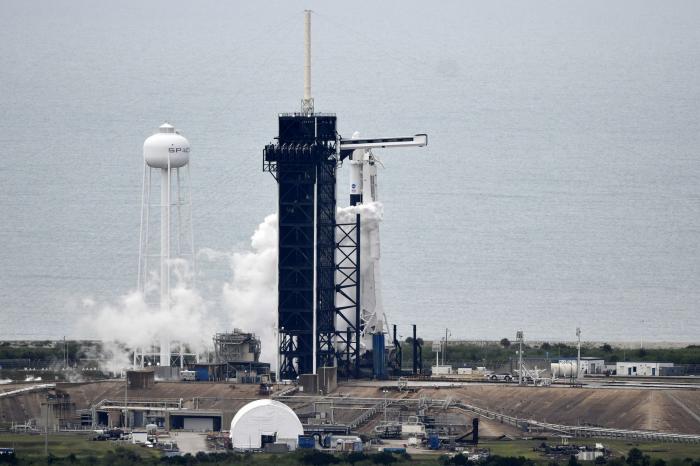 A SpaceX Falcon 9 rocket vents fuel after NASA and SpaceX mnagement called a hold to the launch at the Kennedy Space Center in Florida on May 27. Photo by Joe Marino/UPI | License Photo