It is to be the first crewed flight scheduled to launch from U.S. soil since the last shuttle lifted off in 2011.

The officials from SpaceX and NASA met for a day and one-half at the space center Thursday and Friday to focus on the readiness of crews, capsule, rocket and the International Space Station to support the flight.

Significant risk areas reviewed in the process included the function of SpaceX’s relatively new parachute design, fire suppression systems inside the capsule and the design flaw that led to a Crew Dragon capsule exploding on a test stand in April 2019, said Steve Jurczyk, NASA associate administrator.

The parachutes were tested nearly 100 times, according to SpaceX, but that is fewer times than normally expected for a new parachute design, Jurczyk said.

But in the end, “we have very high confidence that they will function as we need them to when Bob and Doug return,” Jurczyk said. The astronauts, who are to spend one to four months on the space station, are to splash down in the Atlantic Ocean off the coast of Florida.

The explosion in 2019 occurred after another Crew Dragon had flown successfully, without a crew, to the space station and splashed down. SpaceX later blamed the blast on an unexpected reaction between pressurized rocket propellant and a titanium valve, redesigned the valve and tested it.

NASA and SpaceX wound up learning a great deal about the Crew Dragon they never would have had the explosion not occurred, said Kathy Lueders, manager of NASA’s Commercial Crew Program.

“I think that was a real blessing for us. We learned a ton about our systems, the spacecraft and it gave us new knowledge of our materials. You can never sell this NASA-SpaceX team short,” she said.

NASA was scheduled to test fire the Falcon 9 rocket Friday, and conduct a dry rehearsal for the launch on Saturday. A final review of data from those events will lead to a final launch review on Monday.

Behnken and Hurley said Friday they have named the spacecraft and will announce it next week.

A successful mission for Crew Dragon, which is to lift off atop a Falcon 9 rocket Wednesday, will restore that capability and continue the nation’s dominance in space, along with making scientific advances from space exploration.

The flight, called Demo 2, is designed to certify the Crew Dragon for regular ferry service of astronauts to the space station. Since the space shuttle ended service, astronauts have had to buy seats on Russian Soyuz rockets.

The Falcon 9 is to lift off at 4:33 p.m. EDT, from Launch Complex 39A, the site from which many previous Apollo and space shuttle missions were launched. It is being leased by SpaceX.

SpaceX said Crew Dragon is capable of carrying up to seven passengers to and from Earth orbit — and beyond. The capsule is about 13 feet in diameter and 26.7 feet high, and can carry 13,228 pounds at launch. Flight suits include a 3D-printed helmet and touchscreen-compatible gloves.

To prepare for this mission, SpaceX blew up a rocket in January in a final uncrewed test launch of the capsule, proving it could carry astronauts to safety in a launch emergency. 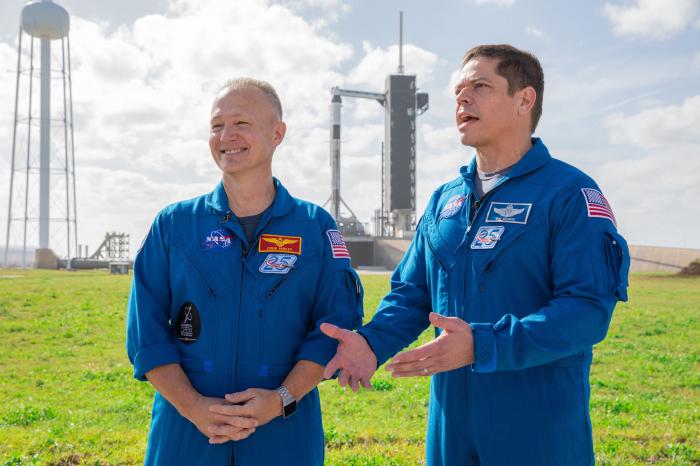