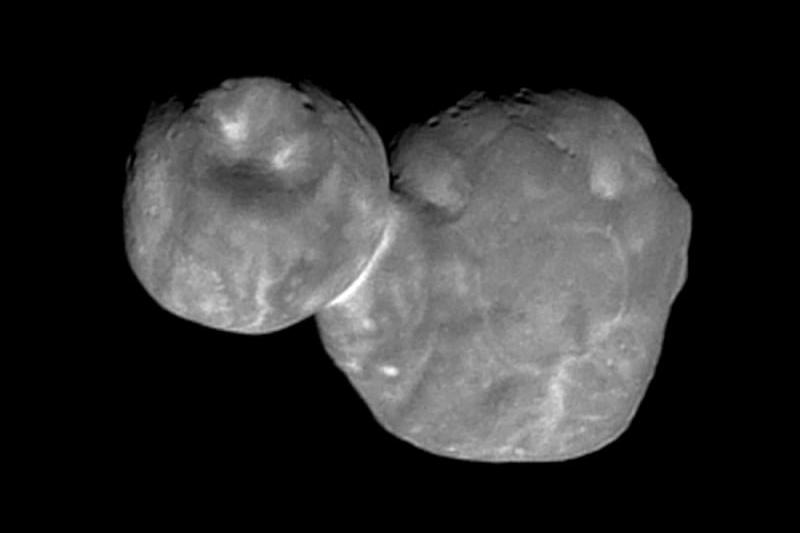 Jan. 25 (UPI) — NASA has released the most high-resolution image of Ultima Thule captured by the space agency’s New Horizons probe. The image was taken on Jan. 1, but scientists working on the mission only recently processed the photograph.

The newly released photo was taken using New Horizon’s Multicolor Visible Imaging Camera just before the probe reached its closest approach with the Kuiper belt object. Back on Earth, scientists used an image processing technique called deconvolution to make the photo even clearer.

Early this month, scientists confirmed that Ultima Thule is a contact binary, a snowman-shaped amalgamation of two spheres. The duo likely came together and fused several hundred million years ago.

Thanks to the new image and image processing, scientists are getting a closer look at the minor planet’s surface textures.

The new image revealed rather large depressions on the smaller of the two orbs. Scientists aren’t sure if the depressions are large impact craters or “collapse pits” created by the venting of volatile materials long ago.

“This new image is starting to reveal differences in the geologic character of the two lobes of Ultima Thule, and is presenting us with new mysteries as well,” Alan Stern, principal investigator on the mission and a planetary scientist at the Southwest Research Institute in Boulder, Colorado, said in a news release. “Over the next month there will be better color and better resolution images that we hope will help unravel the many mysteries of Ultima Thule.”

As made even clearer in the latest image, Ultima Thule is surprisingly smooth — aside from the two large pits — suggesting it has been mostly undisturbed by meteorites. And because Ultima Thule is so far from the sun, it remains in a deep freeze. Scientists think the object could contain the chemical signatures of the early solar system.

“Everything that we’re going to learn about Ultima — from its composition to its geology, to how it was originally assembled, whether it has satellites and an atmosphere, and that kind of thing — is going to teach us about the original formation conditions in the Solar System that all the other objects we’ve gone out and orbited, flown by and landed on can’t tell us because they’re either large and evolve, or they are warm,” Stern said during a press conference earlier this month. “Ultima is unique.”