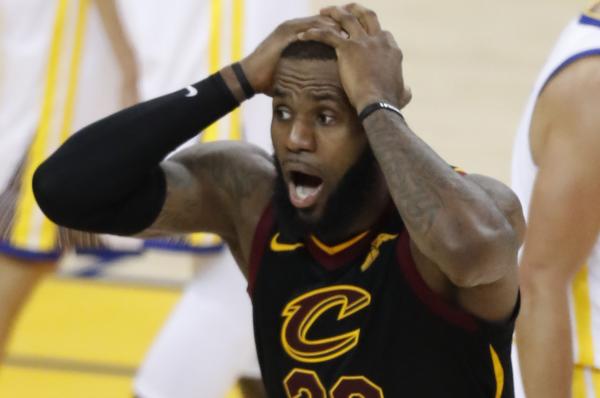 Golden State pulled off the victory despite LeBron James netting 51 points — his most ever in a playoff game — Thursday at Oracle Arena in Oakland.

Stephen Curry led the Warriors with 29 points. Kevin Durant scored 26 points in the victory. The Cavaliers failed to steal a rare road triumph in the series, fumbling away a chance to win the game in the final seconds of regulation.

Cavaliers guard George Hill made the first of two free throw attempts, tying the game at 107-107 with four seconds remaining. J.R. Smith pulled down the rebound of Hill’s miss and had a chance to attempt a game-winner, but dribbled out the clock instead. He ended up throwing the ball back to Hill, but the clock had already hit zero before Hill got a shot off.

“[Smith] thought it was over,” Cavaliers coach Tyronn Lue told reporters. “He thought we were up one.”

Warriors coach Steve Kerr said his team got “lucky” due to Smith’s miscue.

The Warriors outscored the Cavaliers 17-7 in overtime, jumping ahead in the series.

Curry also hit a buzzer beating 3-pointer from way downtown, tying the game at 56-56 at the break.

The Cavaliers were able to keep it close in the third quarter, with James netting 12 points in the frame. But the Warriors outscored the Cavaliers 28-22 in the quarter. Cleveland outscored Golden State 29-23 in the fourth frame to send it to overtime.

Game 2 of the NBA Finals is set for 8 p.m. Sunday at Oracle Arena in Oakland.

“This is LeBron James,” Lue said. “That’s why he’s the best player in the world. He has been doing it for us all season. To do what he did tonight and come out robbed is just not right.”