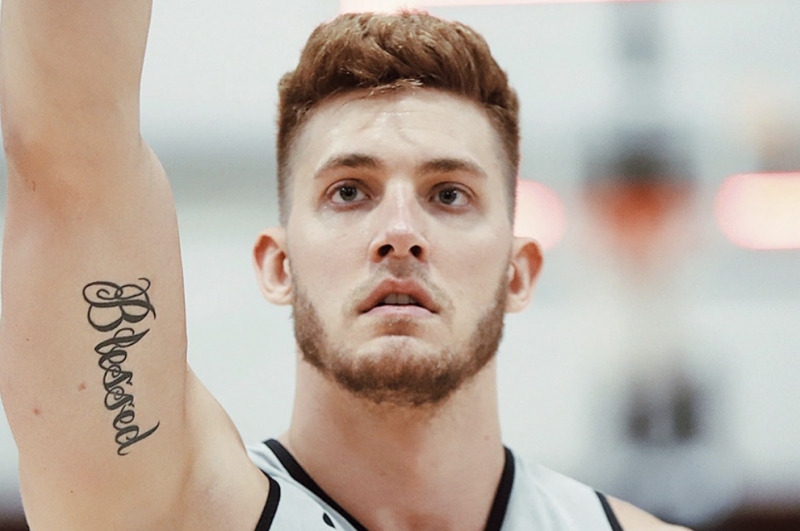 July 22 (UPI) — At least two players have broken quarantine rules inside the NBA’s coronavirus pandemic protective bubble in Orlando, Fla., but most are content in isolation and have even found new ways to connect with fans.

This season, those fans are not allowed to be physically close to the world’s best basketball players as arenas remain shuttered in cities around the United States due to the pandemic.

But fans also could be closer than ever before, in a figurative sense, with a behind-the-curtain look at players as they show off skills in other competitive hobbies like fishing, video games and beer chugging.

“They call me ‘The Hammer.’ People just can’t hang,” said Miami Heat center Meyers Leonard, who has become a social media favorite for fans while he is in the bubble.

“If someone asks, ‘what’s your hidden talent?’ I’d have to say mine is chugging beer.”

Leonard, 28, has been one of many NBA players to compete in the chugging contests over the last week.

Players have posted videos of themselves to social media as they participate in the competitions while in their hotel rooms or outside in small inflatable pools, which has made the Orlando facility appear similar to a college campus.

NBA players arrived at the 230-acre ESPN Wide World of Sports campus in Walt Disney World in early July. They will stay there — physically cut off from the outside world — for the remainder of the NBA’s resumed season — one whose initial campaign was postponed in mid-March due to the pandemic.

The campus bubble features a barber shop, lakes, pools, gyms and a sports bar. Players can order food, including lobster, to eat in their rooms.

Players record their temperatures regularly and have to follow a strict protocol while on the campus, which includes multiple arenas and three hotels for 22 teams.

The basketball stars had to remain in their rooms when they arrived on campus. They now are free to travel and practice on the campus before preseason games begin Wednesday.

Players brought some of the favorite items — or had them shipped to Orlando — to prepare for the isolation.

Jordan Clarkson, J.J. Redick and others have joined Leonard in his 12-ounce races. Leonard also has been a regular on the video game circuit, one of the most-popular ways players have kept busy in the bubble.

NBA players typically have theater rooms and elaborate setups in their elaborate homes.

Leonard and other NBA stars compete on games like Call of Duty, FIFA, Fortnite and NBA2K while they stream competitions online so fans can watch and interact with them from their homes.

“I’ve been playing video games with other guys on the team,” Lakers forward Anthony Davis said. “Everyone brought their gaming systems, so we’re online playing against each other or being teammates.”

Other players have ordered game systems and big-screen TVs from their hotel rooms so they can hone their skills.

Those who aren’t as electronically inclined have participated in outdoor volleyball, yard games like cornhole and board games like Connect Four. Others have bicycled, golfed and fished with teammates when the uncertain tropical weather cooperated.

While many of the players have enjoyed the creative ways to keep busy before the games begin July 30, a few have violated the NBA’s rules for inside the bubble.

Some violations — such as not wearing a mask or leaving the bubble — have been reported by way of the league’s anonymous tip hotline, which enables players and other teams to report violations to the league.

One player violated the rules when he crossed campus lines to pick up a food delivery order. Another left his room when he wasn’t allowed to do so during the initial quarantine period.

The Milwaukee Bucks, Toronto Raptors, Boston Celtics and the Heat are among the top Eastern Conference teams set to compete in the league’s eight-game resumed season in Orlando, prior to the standard playoff schedule.

The New Orleans Pelicans, Portland Trail Blazers, Phoenix Suns, Washington Wizards, Sacramento Kings and San Antonio Spurs also are in Orlando and will attempt to jump into the playoff picture.

That is followed by post-game meetings, media availability and transportation back to the Disney World, where players are staying at the Gran Destino Tower at the Coronado Springs Resort, the Grand Floridian Resort & Spa and the Yacht Club Resort.

The NBA playoffs will start Aug. 17, and the NBA Finals will start Sept. 30. Player guests and families will be allowed on the campus starting Aug. 30.

While all bubbles eventually burst, the NBA’s safety boundary appears solid so far. The league announced Monday that none of the 346 players checked since July 13 has tested positive for the coronavirus.

“I think everybody feels really comfortable with that, but we don’t want to relax or let up our guard,” Heat coach Erik Spoelstra said of the latest COVID-19 test results.

“We have a lot of protocols and we don’t want to have an overconfidence about it. We want to continue to be active participants in making this happen.”