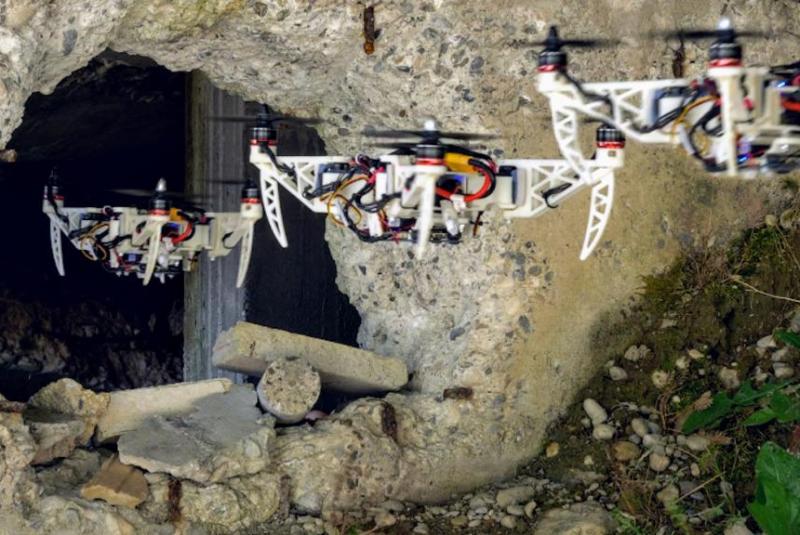 Dec. 12 (UPI) — Drones can be used to explore environs too difficult and dangerous for humans to navigate, like a burned out building or the rubble of a collapsed bridge. But often, entrances to and passageways through these environments are quite small — holes and cracks measuring just a few inches wide.

Engineers at the University of Zurich have developed a foldable drone that can shrink itself to fit through small holes. The technology could help drones navigate tight confines during search and rescue missions in the wake of a disaster.

Inspired by birds, which can fold their wings mid-flight, Swiss engineers built a drone that can fold its arms in order to fly through small spaces without sacrificing aerial stability. Researchers described their new technology in the journal IEEE Robotics and Automation Letters.

“Our solution is quite simple from a mechanical point of view, but it is very versatile and very autonomous, with onboard perception and control systems,” Zurich researcher Davide Falanga said in a news release.

All four of the quadrotor’s arms are foldable, and each boasts independently rotating propellers. All four arms can fold in different directions, allowing the drone to take on a variety of shapes.

“The morphing drone can adopt different configurations according to what is needed in the field,” said Stefano Mintchev, researcher at the Swiss Federal Institute of Technology.

Currently, the drone’s arms can only move in two dimensions, but researchers hope to improve the technology by allowing for 3D foldability. Researchers also plan to develop algorithms that allow the drone to decide in realtime which folded shape will work best for the contours of the entrance or passageway.

“The final goal is to give the drone a high-level instruction such as ‘enter that building, inspect every room and come back’ and let it figure out by itself how to do it,” said Falanga.