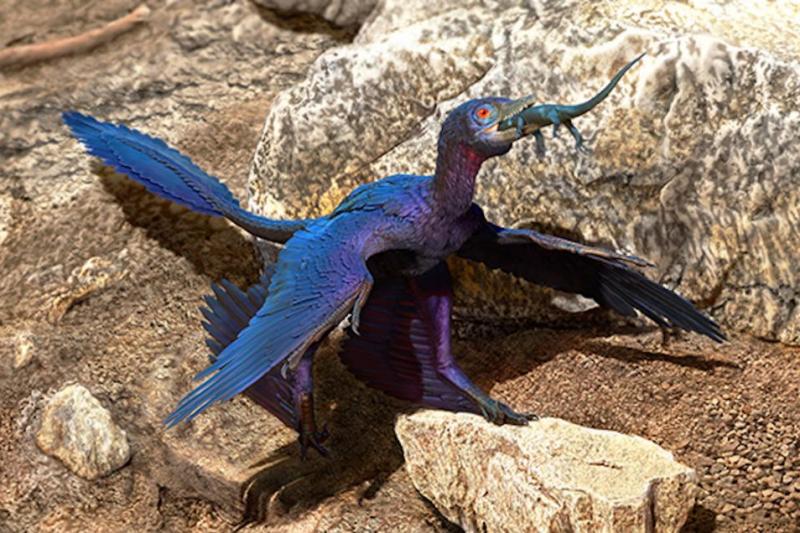 July 11 (UPI) — Paleontologists in China have recovered the complete remains of an ancient lizard from the stomach of a volant dromaeosaurid species, Microraptor zhaoianus, a small, bird-like dinosaur.

According to a new paper published in the journal Current Biology, the lizard specimen comprises a new species, Indrasaurus wangi, named after Wang Yuan, director of the Paleozoological Museum of China.

The lizard’s scientific name is an homage to a Vedic legend in which Indra, the Hindu god of the heavens, lightning, thunder and storms, is swallowed by a dragon during a dramatic battle.

Paleontologists recovered the microraptor and lizard from the Jiufotang Formation. Fossils from Jiufotang Formation and the slightly older Yixian Formation comprise what’s known as the Jehol Biota, the diverse ecosystem that existed in northeastern China between 133 and 120 million years ago.

After closely analyzing the remains of the lizard, researcher Dong Liping and his colleagues at the Institute of Vertebrate Paleontology and Paleoanthropology, part of the Chinese Academy of Sciences, conducted an extensive phylogenetic survey of Cretaceous-era lizards. Liping determined that the new lizard species was unique but closely related to Liushusaurus, a genus of medium-sized, stocky lizards from the Lower Cretaceous. The lizard’s teeth set it apart from its relatives, which suggests the new species may have evolved a specialized diet.

The latest discovery is just the most recent piece of evidence suggesting microraptors were opportunistic predators. Paleontologists have previously found mammals, birds, fish and lizards inside the stomachs of the winged dinosaurs.

With a growing body of evidence documenting predator-prey relations among the Jehol Biota, scientists used the latest study as an opportunity to build a food web.

“Although certainly preliminary, this food web indicates that fish formed the most important food source for secondary and tertiary consumers,” researchers wrote in a news release. “This food web can be used in the future to better understand the Jehol ecosystem.”