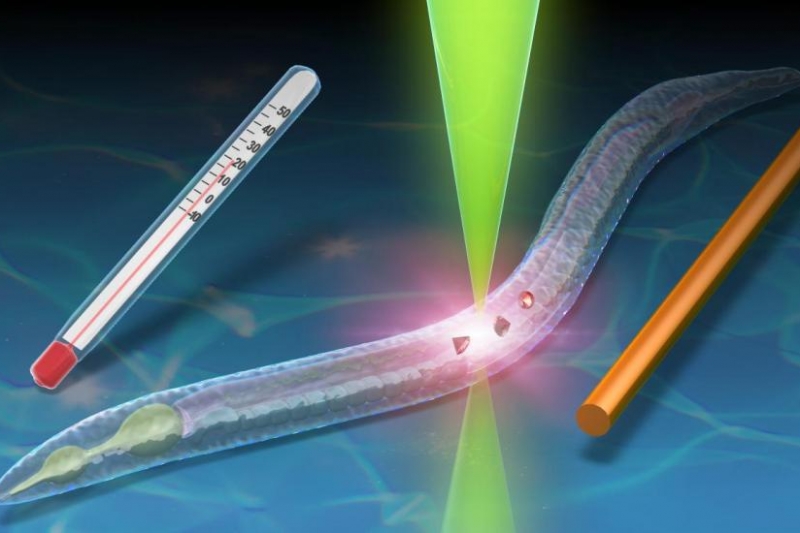 Quantum systems are extremely sensitive to their surrounding environs, making them ideal for measuring in vivo temperature changes. Optical microscopes allow scientists to image microscopic structures in biological samples, and when combined with fluorescent biomarkers, can be used to observe biological processes.

In a new proof-of-concept study, researchers at Osaka City University combined the two technologies in order to observe biological systems and processes in which heat and temperature play an important role.

The new hybrid technology uses nanodiamonds, which scientists injected into nematode worm specimens. The research team’s novel quantum thermometry algorithm was able to track the movement of the microscope diamonds and measure the quantum spins in fluorescent diamonds, revealing temperature changes inside the worms.

“The sensor reads temperature as a frequency shift of the optically detected magnetic resonance,” scientists wrote.

In lab tests, researchers stimulated the mitochondria of the worm specimens using pharmacological treatment, triggering a fever. The nanodiamond-powered quantum thermometer was able to register the temperature increase.

“It was fascinating to see quantum technology work so well in live animals and I never imagined the temperature of tiny worms less than one millimeter in size could deviate from the norm and develop into a fever,” lead researcher Masazumi Fujiwara said in a news release.

“Our results are an important milestone that will guide the future direction of quantum sensing as it shows how it contributes to biology,” said Fujiwara, a lecturer at Osaka City University.