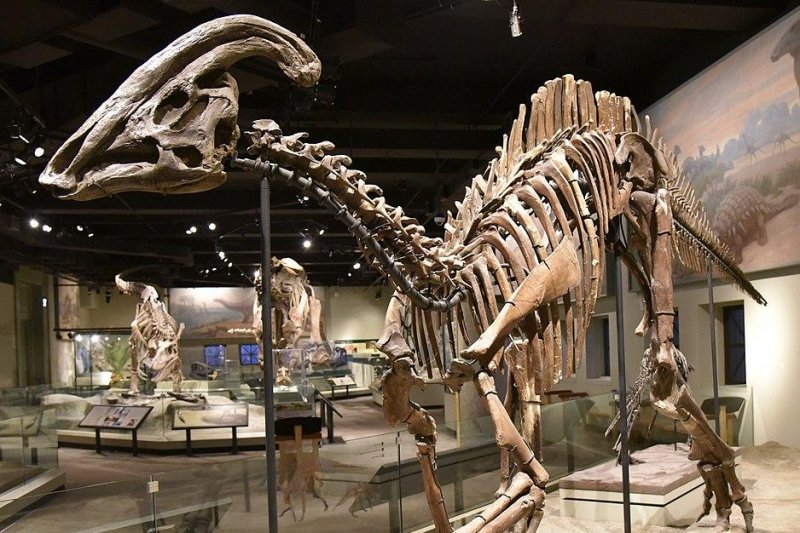 Jan. 25 (UPI) — It’s been almost a century since paleontologists last unearthed a skull belonging to the tube-crested dinosaur Parasaurolophus.

But thanks to a newly excavated fossil, scientists have gained fresh insights into the evolutionary origins of the species’ unusual tube-shaped nasal passage.

Originally recovered from the badlands of northwestern New Mexico in 2017, the newly analyzed skull — described Monday in the journal PeerJ — suggests the crests of Parasaurolophus dinosaurs formed much the same as those of other crested species, such as duckbilled dinosaurs.

Though the tube-like crest of Parasaurolophus dinosaurs looks like something out of Star Wars, they worked more or less like a really big breathing apparatus.

“Imagine your nose growing up your face, three feet behind your head, then turning around to attach above your eyes,” lead study author Terry Gates said in a news release.

“Parasaurolophus breathed through eight feet of pipe before oxygen ever reached its head,” said Gates, a paleontologist from North Carolina State University.

Over the years, scientists have suggested the crests operated as a powerful smelling tool. Some estimated the crest was a kind of built-in snorkel.

“But after decades of study, we now think these crests functioned primarily as sound resonators and visual displays used to communicate within their own species,” said co-author David Evans, vice president of Natural History at the Royal Ontario Museum.

The skull was first found barely exposed in a sandstone slope by Erin Spear, an ecologist and member of a team of researchers from the Denver Museum of Nature and Science.

In addition to the skull, the team, led by Joe Sertich, curator of dinosaurs at the museum, found a lower jaw and several ribs buried in what scientists estimate was once a sandbar.

Though now arid and texted by sparse plots of shrub brush, the badlands of northwestern New Mexico were once wet and lush.

During the Cretaceous period, some 75 million years ago, North America was split into two landmasses by a long sea. The land to the west, called Laramidia, hosted the earliest ridges and peaks of the Rocky Mountains.

“The preservation of this new skull is spectacular, finally revealing in detail the bones that make up the crest of this amazing dinosaur known by nearly every dinosaur-obsessed kid,” said Sertich. “This just reinforces the importance of protecting our public lands for scientific discoveries.”

The skull suggests that while all tube-crested dinosaurs are descended from a common ancestor, the species of New Mexico and Utah are more closely related than those found farther north, species separated by 1,000 miles and 2.5 million years.

“This specimen is truly remarkable in its preservation,” said Evans. “It has answered long-standing questions about how the crest is constructed and about the validity of this particular species. For me, this fossil is very exciting.”