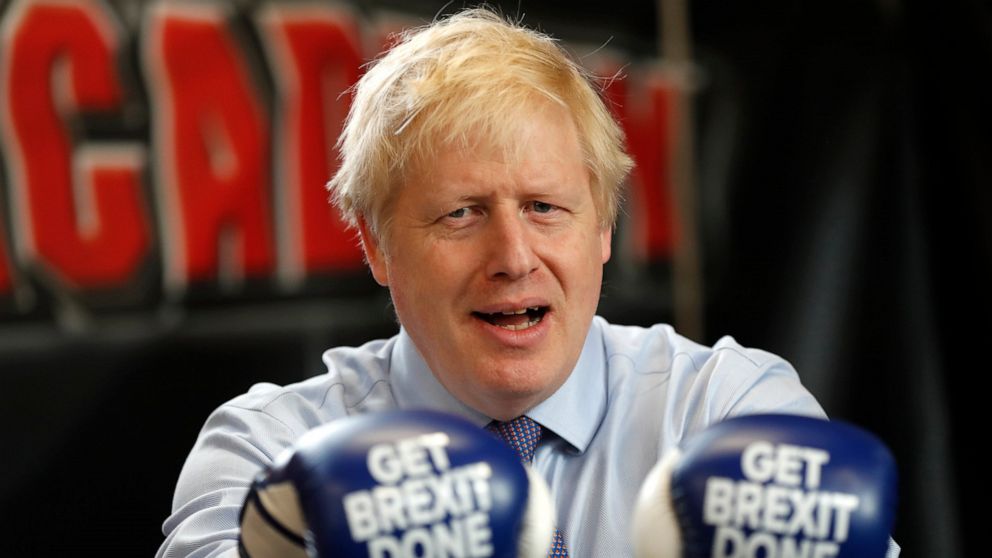 Prime Minister Boris Johnson and opposition leader Jeremy Corbyn prepared to square off Tuesday in the first live televised debate of Britain’s election, each trying to spark a lackluster campaign to life.

The hour-long encounter — the first-ever head-to-head TV debate between a British prime minister and their chief challenger — offers Corbyn a chance to make up ground in opinion polls, which show his Labour Party trailing Johnson’s Conservatives ahead of the Dec. 12 election.

For Johnson, it’s a chance to shake off a wobbly start that has seen the Conservatives thrown on the defensive by candidates’ gaffes and favoritism allegations involving Johnson’s past relationship with an American businesswoman.

Johnson, 55, limbered up Tuesday by donning boxing gloves emblazoned with his campaign slogan “Get Brexit done” during a visit to a gym in northwest England. Corbyn, 70, was photographed having his beard trimmed at a barber shop.

The debate will feature only two candidates after the High Court in London rejected a legal challenge from two smaller anti-Brexit parties, the Liberal Democrats and the Scottish National Party, over ITV’s decision to exclude their leaders from the debate. The court decided it was a matter of “editorial judgment’’ to limit the format to the leaders of Britain’s two largest political parties, one of whom will almost certainly be the country’s next prime minister.

Later in the campaign, the leaders of smaller parties will take part alongside Labour and the Conservatives in two seven-way debates, and Corbyn and Johnson are due to square off again in a BBC debate on Dec. 6.

The stakes are high for both Johnson and Corbyn as they try to win over a Brexit-weary electorate. Both are trying to overcome a mountain of mistrust.

Johnson — an ebullient but erratic performer — has failed to deliver on his vow that Britain would leave the EU on Oct. 31. Corbyn, a stolid socialist, is accused by critics of promoting high-tax policies and of failing to clamp down on anti-Semitism within his party.

Televised debates are a relatively new phenomenon in British elections — the first took place in 2010 — and they have the power to transform campaigns. A confident 2010 appearance by former Liberal Democrat leader Nick Clegg sparked a wave of “Cleggmania” that helped to propel him into the deputy prime minister post in a coalition government with the Conservatives.

During Britain’s last election in 2017, then-Prime Minister Theresa May refused to take part in any TV debates. The decision reinforced the view that she was a weak campaigner and the election turned out to be a debacle for her Conservative Party, which lost its majority in Parliament.

Britain’s stalled departure from the European Union is the overriding issue in the Dec. 12 vote. Johnson pushed to hold the election more than two years ahead of schedule in an effort to win a majority in the House of Commons that could pass his divorce deal with the EU.

More than three years after the U.K. voted to leave the 28-nation bloc, the terms of the country’s departure and its future relationship with the EU remain unclear. Britain is now scheduled to leave on Jan. 31 after the EU granted a three-month delay amid gridlock in Parliament over Johnson’s Brexit deal.

Johnson is running on a promise to “Get Brexit done” by Jan. 31. Labour, meanwhile, says it will hold a new referendum on whether to remain in the EU or leave the bloc.

All 650 seats in the House of Commons are up for grabs. Smaller parties in the race include the pro-EU Liberal Democrats, who want to cancel Brexit; the Scottish National Party, which seeks Scotland’s independence from the U.K.; and the anti-EU Brexit Party led by Nigel Farage.

The Tuesday night debate comes as political parties are launching their election platforms.

Labour plans to release its manifesto on Thursday, promising a much bigger role for the state in the economy. Party economy spokesman John McDonnell told the BBC Labour would tackle society’s “grotesque levels of inequality.”

Johnson’s Conservatives accuse Labour of peddling failed socialist ideas. But in a major shift in policy, the Conservatives are also wooing voters with promises of more public spending on health, education and infrastructure after almost a decade of cuts and austerity budgets.

The Tory campaign has been dented by a renewed focus on allegations that Johnson gave favors and public funding to U.S. tech entrepreneur Jennifer Arcuri — with whom he had a relationship — while he was mayor of London between 2008 and 2016. Johnson has insisted that “everything was done with full propriety.”

The Green Party, meanwhile, released its platform Tuesday, pledging a net zero carbon target by 2030. Co-leader Jonathan Bartley told the BBC the party wanted to introduce a frequent flyer tax and that it was against airport expansions.

“When there’s a war, when we’re facing an existential threat, we don’t hold back, we know that we have to tackle it,’’ he said. “Frankly, if the climate were a bank, we would have bailed it out by now.”