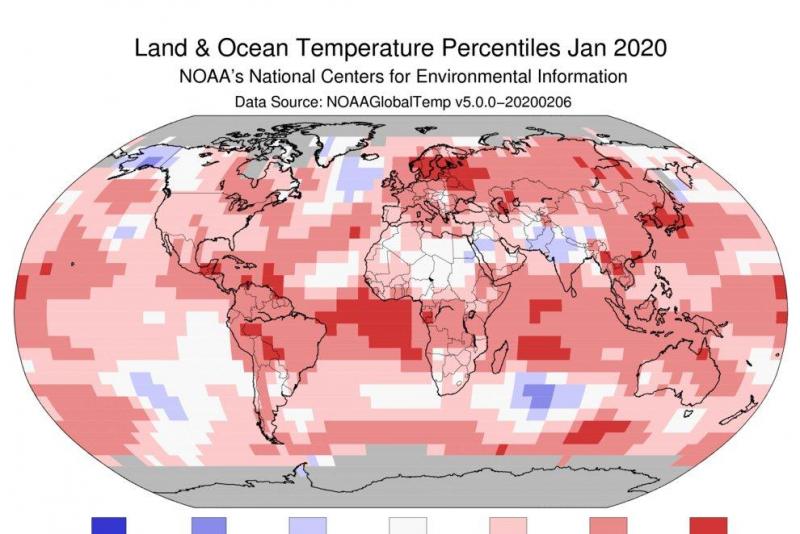 Feb. 14 (UPI) — Last month was the hottest January in all 141 years of climate records, according to scientists at the National Centers for Environmental Information.

In a Thursday press release, the NOAA said January 2020 also marked the 44th consecutive January and the 421st consecutive month with temperatures above the 20th-century average.

On top of that, the scientists said the four warmest Januaries have occurred since 2016 with the 10 warmest occurring in the last 20 years.

Globally, land and ocean surface temperatures were at a record 2.05 degrees Fahrenheit above the 20th-century average, surpassing the previous January record set in 2016 by 0.04 of a degree F.

Meanwhile, Scandinavia, Asia, the Indian Ocean, the central and western Pacific Ocean, the Atlantic Ocean and Central and South America all experienced record-warm temperatures in January, the NOAA said.

The national environment center added that arctic sea ice coverage was also observed to be 5.3 percent below the average of 2018-2010, tying the eighth least amount of ice coverage recorded in the past 42 years.

For the United States specifically, it was the fifth warmest January on record for the lower 48 states, and while it wasn’t a record-breaking month, the heat was widespread, according to the NOAA’s website.

Of the lower 48, Utah and southern Colorado were cooler than average as was Alaska, it said.

Over the past 30 years, however, only five times has the United States’ coldest month of the year been colder than the 20th-century average.

“Averaged over the entire historical record (1895-2020), January temperature has increased by 0.2 degrees F per decade, but in reality, virtually all of that change has come in the past 30 years,” the NOAA said. “The January warming trend since 1991 has been nearly triple the longer-term rate.”