North Korea has shown off what is thought to be a new intercontinental ballistic missile during an early morning military parade, according to analysts.

The event took place before dawn in the secretive country, and was later broadcast there as well as in South Korea.

Edited footage from the parade, which was used to mark the 75th anniversary of the country’s ruling party, shows a 22-wheeled transporter carrying the apparently new weaponry – thought to be larger than anything previously displayed by the country.

Also on display was the Hwasong-15, the longest-range missile the country has ever tested, and what is thought to be a new submarine-launched ballistic missile.

Speaking at the event, Kim Jong Un told North Koreans he would pre-emptively mobilise his strongest military power if threatened, but added that he was not taking aim at any country in particular.

He said North Korea would continue to build “self-defensive deterrence” and apologised for living standards in the country, as well as the coronavirus pandemic.

“I am ashamed that I have never been able to repay you properly for your enormous trust,” he said. “My efforts and
devotion were not sufficient to bring our people out of difficult livelihoods.” 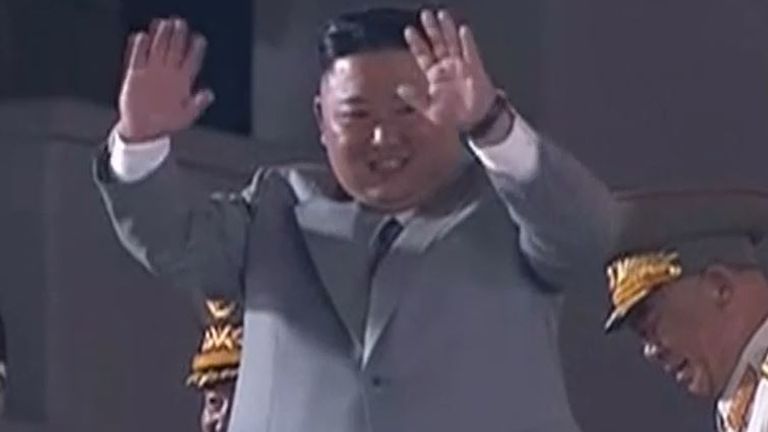 He told the crowds that nobody in the country had contracted the disease – a claim refuted repeatedly by South Korea and the US.

He went on to say the country would overcome the COVID-19 crisis, and that the people of North and South Korea will join hands again.

And he thanked the military for helping the state recover after a series of storms over the summer.

As well as the parade, the anniversary of the party was celebrated with concerts and festivals over several days.

The joint chiefs of staff in South Korea had earlier said it noticed signs that North Korea was holding a military parade in its capital Pyongyang but initially gave no more details.

:: Listen to the Behind the Headline podcast on Apple Podcasts, Google Podcasts, Spotify, Spreaker

They said: “There was a sign that North Korea conducted a military parade this morning at Kim Il Sung Square, mobilising large scale equipment and personnel.

“South Korea and US intelligence authorities are closely monitoring developments, including for the possibility that it was the main event.”

During the week, officials in South Korea said that Mr Kim could have used the anniversary as a “low intensity” show of power, ahead of the US election.

Satellite imagery had shown thousands of soldiers in North Korea practicing their marching, sparking the concerns that the country could be about to unveil a new intercontinental missile.

Foreign ambassadors in Pyongyang are usually invited to the celebrations, but the Russian Embassy said on social media that it had been advised not to travel in the city and refrain from taking photos and videos at the venue.