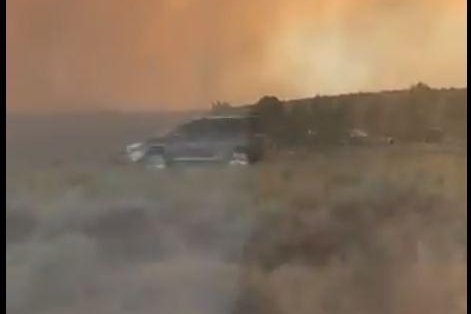 Northern California was alerted to a rare tornado warning unlike any other by the National Weather Service — a fire tornado.

Sure enough, a fiery tornado was spotted shortly after the warning on Saturday near the Nevada border, where a large wildfire, winds and extreme temperatures combined to create a dangerous storm.

The Reno office of the National Weather Service knew the mixture of 60 mph winds with pyrocumulonimbus clouds from the Loyalton Wildfire could produce a fire-induced tornado. The forecasters warned the conditions posed “an extremely dangerous situation for firefighters.”

“The Loyalton Fire to the east of the Sierra Valley exploded most impressively this afternoon, with a very large pyrocumulus and reports of fire tornadoes,” the NWS warning said. “Due to the possibility of very strong fire-generated winds and extreme fire behavior with danger to fire personnel, a tornado warning was issued to heighten awareness in the area of the fire.”

The wildfire has charred 20,000 acres in Lassen County, California, as of Sunday morning and has ignited serious concerns and sparked evacuations on Saturday for portions of Sierra, Lassen and Plumas counties.

Firenados are created when rising hot air from a fire becomes twisted by winds changing direction, much like the more common land tornado. The difference between a regular tornado and the firenado, however, is that winds combine with smoke plums to create especially dangerous conditions.

“In terms of the ingredients, the intense heat of wildfires already causes large, billowing columns of rising hot air and smoke, but what causes them to turn into “pyrocumulonimbus”, or thunderstorm clouds caused by wildfire smoke, has to do with the state of the atmosphere above the fire,” said AccuWeather Meteorologist Jake Sojda.

Typically in the west, the air is very dry, so the air simply doesn’t have enough moisture for the rising air above the fire to turn into clouds, you just see all of the ash and embers and dust from the wildfire itself. But Sojda explained that if the atmosphere above a wildfire gets an influx of moisture, then the rising air and smoke can also form clouds as it rises and cools.

“A storm system off the California coast helped push some extra moisture into Northern California, enough to allow the rising air and smoke from the Loyalton Fire to turn into clouds and eventually a towering thunderstorm,” Sojda said.

“Localized wind currents caused by a combination of the thunderstorm, the intense heat from the fire, and the shape of the valley around the fire and storm helped cause the storm to rotate, just like a supercell thunderstorm that are famous for causing tornados in places like the Great Plains,” Sojda said.

“Not only can these “pyro-thunderstorms” cause wind damage and tornadoes just like a more traditional severe thunderstorm, but they can also cause the fire to behave very erratically and spread very quickly. Embers blown about by the gusty thunderstorm winds can also start new fires. Since it is a thunderstorm, there is also the threat of lightning, which can start new fires, but can also be dangerous to firefighters without shelter who are trying to fight the fire,” Sojda said.

“Firenadoes are an extreme weather phenomenon that can occur with rotating fire columns,” NWS Reno wrote on Twitter. “As extreme as this behavior is, the #CarrFire had an extreme example of this.”

The “Fire Tornado” #LoyaltonFire is less than 20 miles away.