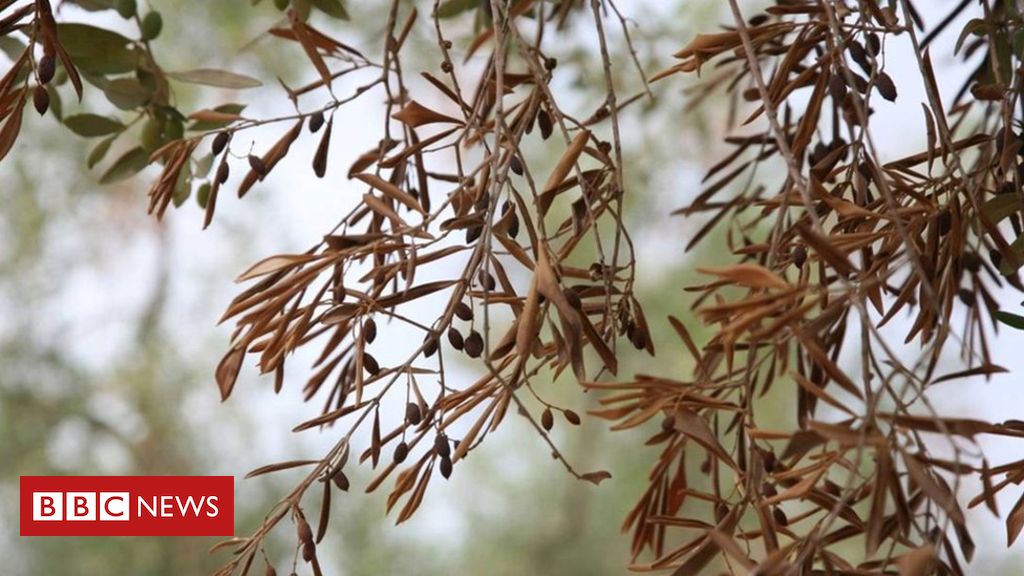 Southern Europe countries are said to be at the greatest risk from a deadly disease described as a “very serious threat” to the EU’s olive industry.

The European Food Safety Authority (ESFA) says computer modelling has helped understand how it spreads, but there is no cure for infected plants.

Experts describe Xylella as one of the “most dangerous pathogens worldwide”.

It was first recorded in Italy in 2013, and has since spread to other European nations.

“One of the problems of Xylella is that is a bit of a silent spreader,” explained Dr Stephen Parnell from the University of Salford and chairman of the EFSA’s working group on Xylella fastidiosa pest risk assessment.

“That sort of information is really important when you try and design ways to detect the disease in new areas.”

He warned that once the disease infected plants, there was no cure.

“The only way to eradicate or slow down the spread is to remove the inoculant source.

“However, there are other things you can do, such as control the vector population and remove the weeds where the vectors can live.”

Since the pathogens arrival in the EU six years ago, researchers have been able to collect data about it and have now developed computer models to help them tackle the disease.

“What we were able to do was to simulate the spread of Xylella at an orchard scale and at a landscape scale, and to use that information to test out the effectiveness of certain control methods,” Dr Parnell observed.

The bacterium invades the vessels that a plant uses to transport water and nutrients, causing it to display symptoms such as scorching and wilting of its foliage, eventually followed by the death of the plant.

Since it was first detected in olive trees in Puglia, southern Italy, in October 2013, it has been recorded in a number of other locations, including southern France, Spain and northern Portugal.

Experts warn that should the disease, which has numerous hosts and vectors, spread more widely, then it has the potential to devastate the EU olive harvest.

Globally, the EU is the largest producer and consumer of olive oil. According to the European Commission, the 28-nation bloc produces 73% and consumes 66% of the the world’s olive oil.

Reports suggested that the X. fastidiosa outbreak led to a 20% increase in olive oil prices during 2015.

Dr Parnell explained that the risk assessment by the EFSA showed that the greatest risk of an outbreak was in southern Europe.

But, he added: “Because it is such as complicated pathogen, you hsve got multiple sub species , multiple strains etc, they all behave in a slightly different way.

“One variety has shown that it could potentially infect areas in northern Europe.”

Dr Parnell is part of a £5m UK programme called BRIGIT, co-ordinated by the John Innes Centre, designed to monitor for the introduction of the Xylella pathogen, and improve the measures in place to deal with it should it arrive in the UK.

A recent study estimated that the recent outbreak of ash dieback in the UK was going to cost UK taxpayers about £15bn.

Dr Parnell said that there was still a lot to learn about the disease and its behaviour and the way it spread.

“There is such a lot of diversity within the (Xylella) pathogen itself; there are many host species so I think we are still in the phase where need to collect more data.

“There is still a lot of uncertainty out there, unfortunately.”