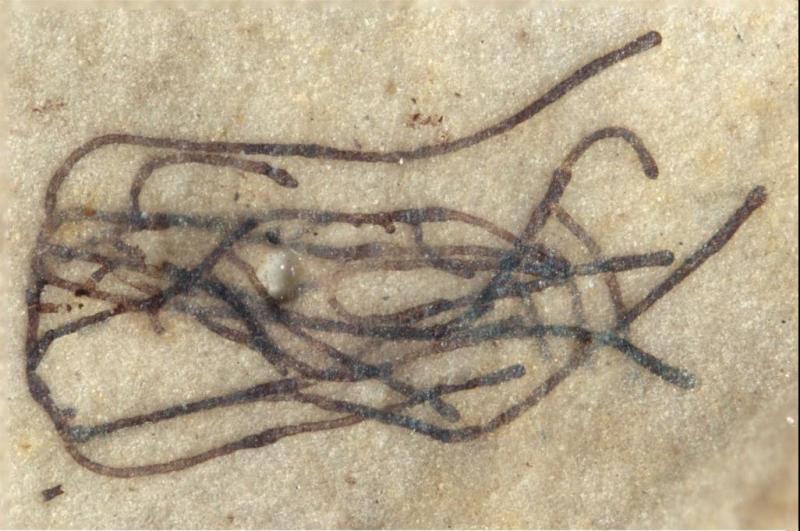 The 1-billion-year-old micro-fossils, tiny imprints left behind by the algae species Proterocladus antiquus, comprise the oldest evidence of green seaweeds yet discovered.

The algae imprints were discovered in rock slabs recovered near the city of Dalian in the Liaoning Province of northern China. After dying in the shallow seas where they lived, the green seaweed became baked into layers of ancient marine sediment — the shapes of their multiple branches and upright growths preserved in rock for millions of years.

Researchers described the record discovery this week in the journal Nature Ecology and Evolution.

“These new fossils suggest that green seaweeds were important players in the ocean long before their land-plant descendants moved and took control of dry land,” Virginia Tech geoscientist Shuhai Xiao said in a news release.

Life on Earth depends on plants and algae for food and oxygen, but prior to 450 million years ago, plant life had not yet adapted to dry land. The latest findings suggest green algae anchored Earth’s food chains for the 550 million years leading up to the arrival of the first land plants.

“Our study shows that green seaweeds evolved no later than 1 billion years ago, pushing back the record of green seaweeds by about 200 million years,” Xiao said. “What kind of seaweeds supplied food to the marine ecosystem?”

Most geobiologists estimate Proterocladus antiquus and its relatives adapted to land over the course of a few hundred million years. Trees, grasses, food crops and bushes all evolved from these early green seaweed species, members of the Chlorophyta phylum.

“Molecular clock and biomarker data indicate that chlorophytes diverged in the Mesoproterozoic or early Neoproterozoic, followed by their subsequent phylogenetic diversification, multicellular evolution and ecological expansion in the late Neoproterozoic and Palaeozoic,” researchers wrote in their paper.

Not everyone is in agreement. Some researchers claim green plants first evolved in rivers and lakes and only later made their way into the ocean.

The thousands of seaweed species found on Earth are divided into three classes: brown, red and green. Scientists have found fossil evidence of red seaweed, Rhodophyta, dated as far back as 1.047 billion years old.

Now, scientists can confirm that green seaweed was living in Earth’s oceans around 1 billion years ago, too. And they looked a lot like green seaweeds found in the ocean, today.

The evidence supports the theory that chlorophytes paved the way for the evolution of green plants on land.

“These fossils are related to the ancestors of all the modern land plants we see today,” Xiao said.