ORLANDO, Fla., Oct. 16 (UPI) — The anticipated return to deep space in 2024 for the first time in nearly 50 years brings a unique set of challenges that only one spacecraft on the planet currently can meet, officials with Lockheed Martin said at a global space event this week.

“Deep Space has really unique environment and is more dangerous than low-Earth orbit, so we have to consider things like increased radiation … it forces us to come up with innovative solutions,” Hopkins said during the online panel Wednesday during the annual International Astronautical Congress.

NASA plans to send launch its Space Launch System rocket and Orion capsule in an uncrewed Artemis test flight from Florida to the moon in late 2021. The capsule for that flight was delivered in March to Kennedy Space Center in Florida, while the SLS rocket awaits further testing in Mississippi in November.

Astronauts are scheduled to fly to the moon’s South Pole in 2024 inside Orion.

The Orion crew capsule has been to space already, without astronauts aboard. It was launch in December 2014 and splashed down about 4 1/2 hours later in the Pacific Ocean. During that test, Orion traveled twice through the Earth’s radiation belts and reached an altitude of 3,600 miles above Earth.

“So our flight-proven hardware can help us more quickly build up a habitat, to live and work on the moon,” Hopkins said. “It’s motivating to me to think about all the incredible science that can be done on the moon in the exploration that could be possible.”

Currently, Orion is designed for 21-day crewed journeys, he said.

“But this can be adjusted and Orion could support a mission of hundreds of days or even 1,000 days,” Hopkins said. “We are keeping in mind that Artemis moon missions are meant to be a first step on the way to Mars.”

We also have plans for upgrades and mission support packages to help advance the technology, as, as we move into the future,” said Kerry Timmons, Lockheed’s senior manager for Orion systems integration.

“We have come so far through the development stages of the Orion spacecraft. Now we have the hardware, engineers and suppliers with the experience and the products needed to start launching on a more regular basis,” Timmons said. 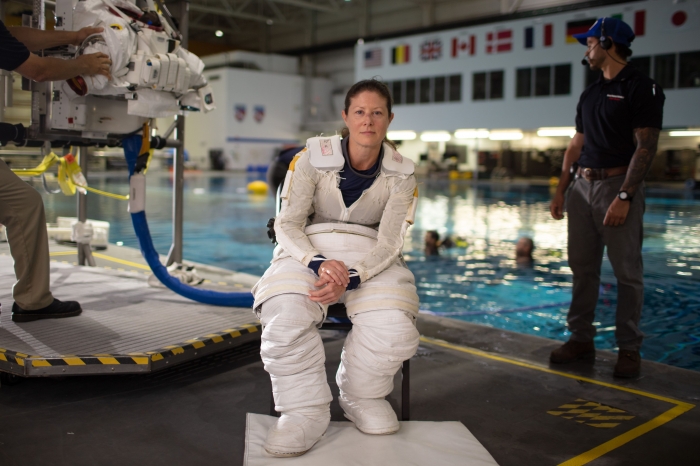 Tracy Caldwell Dyson pauses for a portrait in her spacesuit before going underwater in the Neutral Buoyancy Lab at NASA’s Johnson Space Center in Houston on July 8, 2019. Photo by Bill Ingalls/UPI