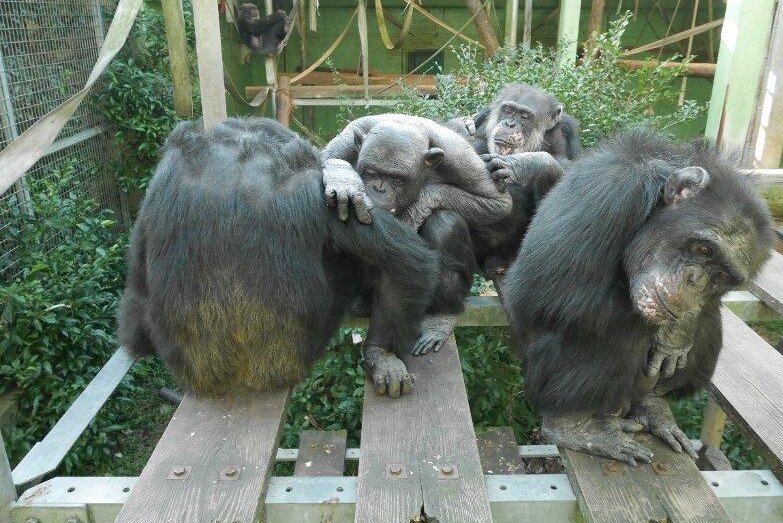 Feb. 24 (UPI) — Humans are a social species — the human success story is in many ways a story of cooperation and collaboration.

But from the beginning, as evidenced by prehistoric skull fractures and ancient mass burials, the human story has also been marked — and marred — by violence.

Now, new research suggests the origins of this dichotomy between cooperation and conflict can be traced to our closest relatives, the great apes.

In a first-of-its-kind study, published Wednesday in the journal PLOS One, scientists found chimpanzees are more likely to cooperate and form tight in-group bonds after exposure to outsider threats.

“The association between in-group cohesion and out-group aggression has long been recognized in humans, but the evolutionary background remains understudied,” first author James Brooks told UPI in an email.

“Comparisons between species can play a critical role in understanding the evolution of humans’ intergroup relations. We studied chimpanzees to gain insight into whether this association is shared with one of our species’ closest relatives,” said Brooks, a graduate student at Kyoto University’s Wildlife Research Center.

While a handful of field studies have looked at the relationship between in-group bond formation and out-group aggression, the latest study is the first to explore the dynamic in experimental contexts.

For the study, researchers periodically exposed groups of chimpanzees to the vocalizations of unfamiliar chimps. Researchers also exposed one group of chimps, the control group, to the sounds of crows.

Afterward, scientists observed the level of cooperation and in-group cohesion demonstrated by the different groups of chimps.

“We measured their spatial proximity along with rates of social grooming, play, and aggression, and found evidence in each measure that chimpanzees were more cohesive and tolerant in the outgroup condition compared to control,” Brooks said.

The sound of unfamiliar chimps induced stress among the chimpanzees, but researchers found the stress didn’t translate to strife within the group.

The data showed chimpanzees who had heard out-group vocalizations were more likely to hang out in close proximity to one another and engage in socializing behaviors compared to the control group.

The authors of the latest study are currently using the same experimental setup to study the association between in-group cohesion and out-group aggression in bonobos, humans’ other closest relative.

“Bonobos form multi-day, tolerant associations with other groups and have never been observed to kill another bonobo,” Brooks said.

“If the association between in-group cohesion and out-group threat is shared with bonobos, it implies it’s a shared trait that’s more consistent through great ape evolution, but if we don’t find the same trend in bonobos it implicates intergroup aggression and competition as having an active role in selecting for the association,” Brooks said.