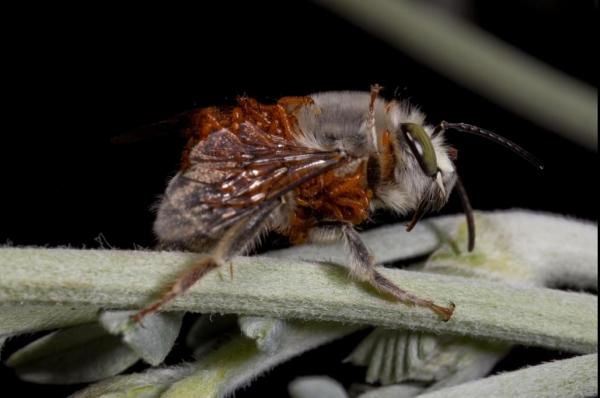 Sept. 11 (UPI) — Blister beetles are chemical con artists, and according to new research, they can adapt their trickery to dupe a variety of bee species.

During one of several larval stages, Meloe franciscanus beetles infiltrate bee nests by mimicking the chemicals emitted by female bees — perfume-like compounds called pheromones. The perfume attracts males, which the larvae attach themselves to, hitching a ride back to the nest.

Once in the nest, the beetle larvae can subsist on pollen, nectar and bee eggs, emerging as adult bees the following winter.

New analysis of the parasite’s chicanery showed blister beetle larvae adapt their chemical ploy to match the perfume of the local bees species.

“Male bees of both species were more attracted to local parasite larvae than larvae from the distant locale because the larvae tailored their pheromone-mimicking blends to the pheromones of their local hosts,” Leslie Saul-Gershenz, a graduate student in entomology at the University of California, Davis, said in a news release. “Additionally, the larval aggregation adapted their perching height at each location to the patrolling height of local male bees.”

Chemical signaling is a vital communication tool for many insects. And as insects evolve and diversify, chemical coding helps species differentiate themselves. The latest research — published this week in the journal Proceedings of the National Academy of Sciences — suggests parasites evolve their chemical repertoire alongside their preferred hosts.

The latest analysis showed blister beetles also adapt to the behavioral patterns of their host species.

“They are locally adapted to different hosts both chemically and behaviorally; and their emergence times are plastic across their geographic range,” Saul-Gershenz said. “It has been fantastic to unravel this species’ puzzle.”