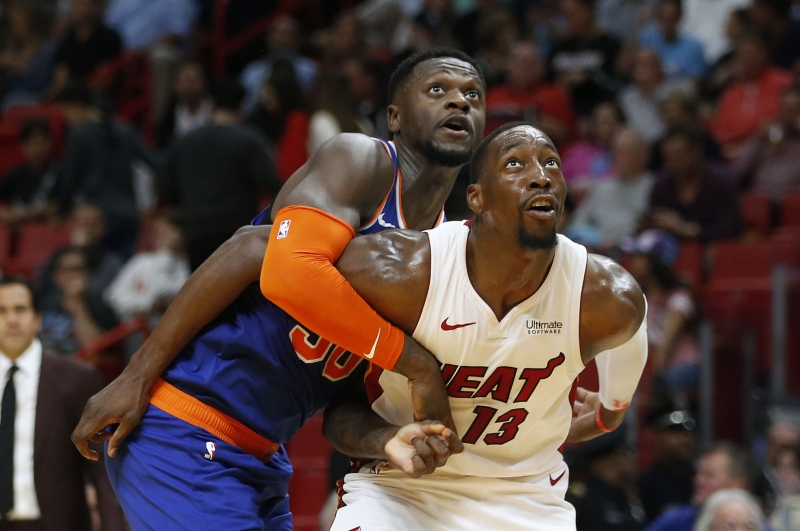 MIAMI, Aug. 6 (UPI) — Miami Heat president Pat Riley’s vision to transform 6-foot-9 center Bam Adebayo into a smooth playmaker has come to fruition. Now, the Heat’s excavation of Adebayo’s potential has the team in position for a playoff run.

“Pat [Riley] told me they were going to put the ball in his hands and they wanted him to be 50% [better] than what he was at Kentucky,” said John Calipari, who coached Adebayo at Kentucky before he was drafted by the Heat.

“I’ve seen him do things now that I only saw in spurts when he was in high school and here.”

Adebayo’s unique versatility, which creates space on the floor on the offensive end, has been integral to the Heat’s success. Adebayo still uses his 255-pound frame as a dominant interior player, but defenders must respect his jump shot and talent as a passer and ball handler.

Adebayo’s rapid growth as a player has resulted in heightened aspirations for the Heat (43-25) as an Eastern Conference title contender. Miami is on track for its second-highest win total since LeBron James and Dwyane Wade led the team to the NBA Finals in 2013-2014.

The Heat’s win Tuesday in Orlando, Fla., was another chance for Adebayo to show off his development. Miami played without star player Jimmy Butler and several other key players. Adebayo responded with 21 points, 12 rebounds and two assists against the favored Boston Celtics.

Adebayo’s confidence was at an all-time high before the NBA’s four-month coronavirus hiatus. He said he is close to the level he was at when the season stopped in March, but needs a few more games to return to peak form.

Adebayo stayed under the radar early on during his Heat tenure, but has started to receive recognition. The honors have fueled his drive to be a better player.

“I grew a lot during the stretch when I got Player of the Week [in December],” Adebayo said. “I feel like that and becoming an All-Star were my biggest confidence boosters.”

The third-year big man has doubled his scoring average this season and logged 16.3 points, 10.5 rebounds and 5.1 assists per game.

He has scored at least 20 points in two of the Heat’s three games since the campaign resumed Aug. 1 in the league’s bubble at the ESPN Wide World of Sports complex at Walt Disney World.

“I feel like we have a great chance and can go against anybody,” Adebayo told reporters Wednesday. “We proved it throughout the season and are proving it now.”

Adebayo already has been compared to Heat legends and lauded as a “complete” and “great” basketball player by some of the most respected coaches in the game.

He has received such praise for his willingness to go toe-to-toe with players who have different specialties as he faces up with Giannis Antetokounmpo one night before he is tasked with defending smaller guards and forwards.

Spoelstra said the Heat have given Adebayo new responsibilities on a monthly basis and allowed him to mature alongside franchise legends. He is already in All-Star form, but Calipari believes Adebayo’s stock is still on the rise.

“I think you are going to see a kid who shoots it better and maybe becomes a 22 to 23 point per game scorer … maybe more,” Calipari said. “He will still be a double-double machine because he can do both [pass and rebound].”

Adebayo — the No. 14 overall in the 2017 NBA Draft — is one of just three players from that class who has become an All-Star. Riley — who played at Kentucky in the 1960s — has constructed a pipeline of players from Calipari’s program who have had recent success in Miami.

Calipari said the blueprint for Adebayo’s college development was first molding him into a dominant interior defender, where he could play a maximum of 7 feet away from the rim. He coached Adebayo to use two hands to bring in every rebound and to master the pick and roll defense.

Calipari knew going to the Heat — a franchise with a reputation of tough workouts and player discipline — would allow Adebayo to thrive. It also has allowed former Kentucky star and Heat rookie Tyler Herro to elevate his game.

“There are guys that don’t want to work like that,” Calipari said. “There are other guys that feed off that, like Tyler and Bam. They were good for us, but they then took the next step in Miami.”

Adebayo now practices with guards in addition to big men. He leads fast breaks as the primary playmaker, but still bullies his way to the rim, if necessary.

“Bam is a complete basketball player,” Spoelstra said. “He wants to win and impact winning on both sides of the floor. He’s willing to take on any challenge, which is unique. He continues to study and get better and more disciplined.”

Adebayo will once again battle against Antetokounmpo when the Heat face the Milwaukee Bucks at 4 p.m. EDT Wednesday in Orlando. The reigning NBA MVP scored just 13 points in his last game against the Heat in March. The Heat are 2-0 against the Bucks this season.

“At the end of the day, this is a team sport,” Adebayo said. “My teammates are behind me 100%. It’s not really about being compared to [Heat legends]. It’s just that I’m trying to impact winning.”