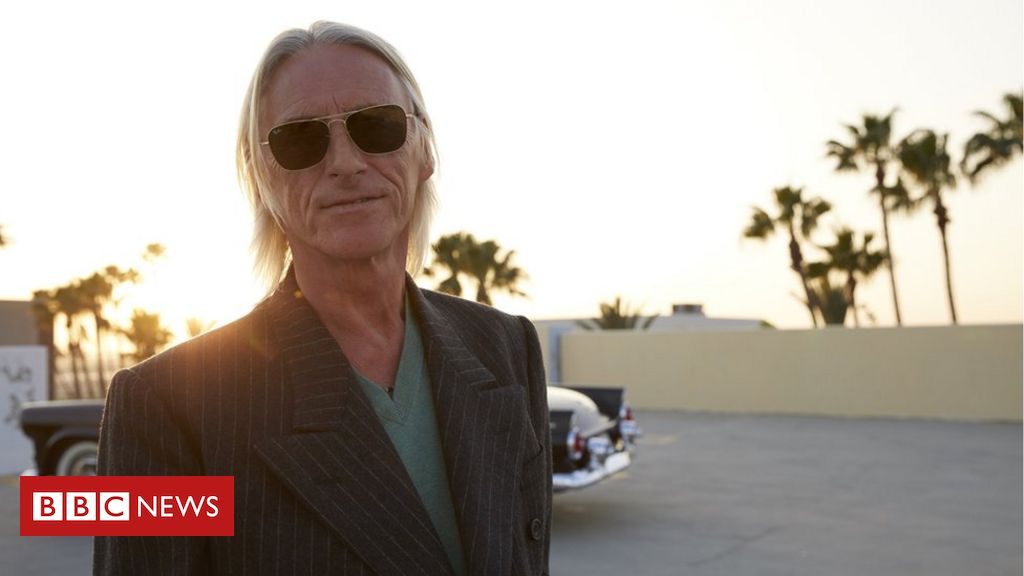 As the owner of one of the most famous haircuts in the country for the past 40 years, Paul Weller is being surprisingly serene about his lockdown locks.

“Well, I was kind of letting it grow anyway, but I’ve had no choice now. You have to just adapt, don’t you?”

Rather than attempting to trim his own barnet at home, as others have done to varying degrees of success, the musician has been letting it all hang out while “trying to make the best of it” at his nearby studio in Surrey.

“There’s so much time off and obviously no live work, so I’m just cracking on and trying to get on with the next thing really,” he says.

First things first though, and his 15th solo album, On Sunset, is released into the world on Friday, as the barbers of England prepare to go back to work.

Each Sunday of late, the 62-year-old has been showcasing his new material (and look) with a series of home-made acoustic sessions, direct from Weller HQ. “My wife talked me into doing them,” he admits, “she’s my camera assistant!”

Weller, like his heroes The Beatles and David Bowie before him, is usually in a constant state of motion. But his third album in four years (not including the Jawbone film soundtrack or his recent foray into field recording) finds him, like many of us right now, pausing for thought, at least.

“Not a thing I’d change if I could / I’m happy here in my neighbourhood,” he sings on Village; a soul-stirring orchestral ballad.

The album also finds him back on Polydor – the record label that famously rejected the final offering from his ’80s pop band The Style Council, bringing an end to that chapter of his career.

Modernism: A New Decade; their 1989 deep house record, without a six-string guitar within earshot, ultimately didn’t see the light of day in full until nine years later, when the whole world was by then dancing to an electronic beat.

“Polydor definitely weren’t ready for it,” recalls Weller, “and probably our audience at the time might not have been, but it’s hard to say.

“It was a bit of an underground sound still at that time, it wasn’t mainstream in any way.

“Years later I can sort of see their thinking – that doesn’t mean I agree with it – but of course the influence and house music in general has just kept going, even now it’s still banging drums, man.

“But that’s what it was at the time and you have to accept it,” he shrugs.

The passage of three decades, it seems, has left Weller harbouring “no ill feelings” about the decision, as, he points out, “the whole business is different” now.

“It’s funny though, because I can remember when I was first at Polydor, all them years ago, everyone was always older than me,” he says.

“Now all their team is at least 20 years younger, but I like that.

“I really love a lot of the artists they’ve got on their roster as well [Billie Eilish, Celeste, Sam Fender] so that was good enough for me.”

This time around, his LP was submitted and approved by both the label and, it appears, the critics.

The Guardian gave it four stars, describing Weller’s 2020 sound as “warm, wise and still capable of surprise”. “With enough melodies to appease the feather-cut-dads fanbase, and enough experimentation to slake his own curveball tastes, this is have-your-cake-and-eat-it Weller,” wrote Alexis Petridis.

The same score was awarded by The Times, who declared “the Modfather goes hippy dippy”. “You can generally tell what Paul Weller is up to by the state of his hair,” noted Will Hodgkinson.

Meanwhile, The Independent also went for four stars, with Mark Beaumont writing that On Sunset “brilliantly merges this new interest in the avant garde with his ever-changing future soul mood”.

The title track was inspired by a pre-coronavirus trip to Sunset Boulevard in Los Angeles, where the father-of-eight was visiting his eldest son. It evoked memories of his first-ever time there, “back in ’77”, as a 19-year-old “kid” on tour with what would become, for many, the seminal British post-punk band, The Jam.

“I was staying in a little hotel around by that sort of area of the strip, where the [legendary music venue] Whisky a Go Go is. The Rainbow Room and the Sunset Marquis is a bit further down the road,” he explains.

“I’ve been to LA countless times since but I haven’t walked around this little area since that time, and I just thought ‘Oh my god, so much time has elapsed’ and I forget that sometimes as well.

“So it was a very reflective moment, thinking of funny things and happy times we had there.”

He adds: “I just imagined this person looking up old friends, or old lovers or whatever the deal may be, and obviously everyone’s moved on.

“The music has got some dark spots in there but generally it’s kind of up, and summer music I think.”

‘Put pressure on this to stop’

The time of its release has coincided with dark spots for humanity, what with the coronavirus pandemic, and the death of George Floyd – a black American who died while in the custody of a white police officer.

Weller, who has grown-up children of mixed heritage himself, thinks “it’s shocking that it’s still going on there” and he backs the Black Lives Matter protests.

“After everything that happened in the post-war years with civil rights and having a black president, nothing’s changed,” he states.

“I don’t know how they are gonna resolve it in that country, it’s so deep-rooted.”

“The whole world has got to put pressure on this to stop,” he goes on.

His words, as the lead songwriter in The Jam “took social protest and cultural authenticity to the top of the charts” according to biographer Sean Egan. The man himself is disappointed to hear that his lyrics -to tracks like Eton Rifles, That’s Entertainment and Town Called Malice – are still apt in the UK today.

“It would be nice to think those words have come from a time when they’re not relevant anymore because everyone is different and everyone has moved on, but sadly it doesn’t seem that that way,” he sighs.

For “the first time for a long time” the virus has left The Modfather without a clear trajectory, yet still “happy doing what I do”.

“I love just making music, making records. I don’t wish for anything else to be honest with you.”

True contentment in the modern world – now that is a good look for all seasons.

On Sunset is out on 3 July