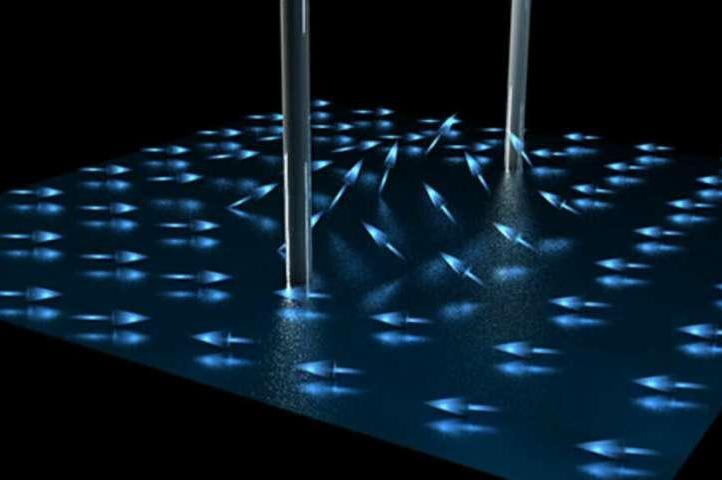 Researchers at Aalto University in Denmark observed “walls bound by strings” in superfluid helium-3. The breakthrough could allows scientists to better understand what the universe looked like in its earliest days, as it quickly cooled in the wake of the Big Bang.

Helium is unique in it’s ability to remain a fluid even at cryogenic temperatures. When supercooled, helium becomes a superfluid, which means it boasts zero viscosity. Superfluids can flow forever without losing energy.

When trapped inside a nanostructure, superfluid phases of the isotope helium-3 can help scientists study unusual quantum structures called half-quantum vortices. The movement of helium inside these vortices is dictated by quantum physics.

“We initially thought that the half-quantum vortices would disappear when we lowered the temperature,” lead researcher Jere Mäkinen, a doctoral student at Aalto University, said in a news release. “It turns out that they [half-quantum vortices] actually survive as the helium-3 sample is cooled below half a millikelvin — instead a non-topological wall appears.”

The wall isn’t physical, so it doesn’t block the flow of helium, but it does alter the helium’s magnetic properties — an alteration scientists measured using nuclear magnetic resonance.

Some cosmologists theorize the early universe experienced symmetry-breaking phase changes similar to those observed by Mäkinen and his colleagues. As the universe suddenly expanded, quantum structures like domain walls and quantum vortices became frozen in place. By studying the quantum characteristics of superfluids, scientists can gain insights into how these unique structures may have influenced the formation and evolution of the early universe.

“While liquid helium-3 would be too hard and expensive to maintain as a material for a working computer, it give us a working model to study phenomena that could be used in more accessible future materials,” Mäkinen said.