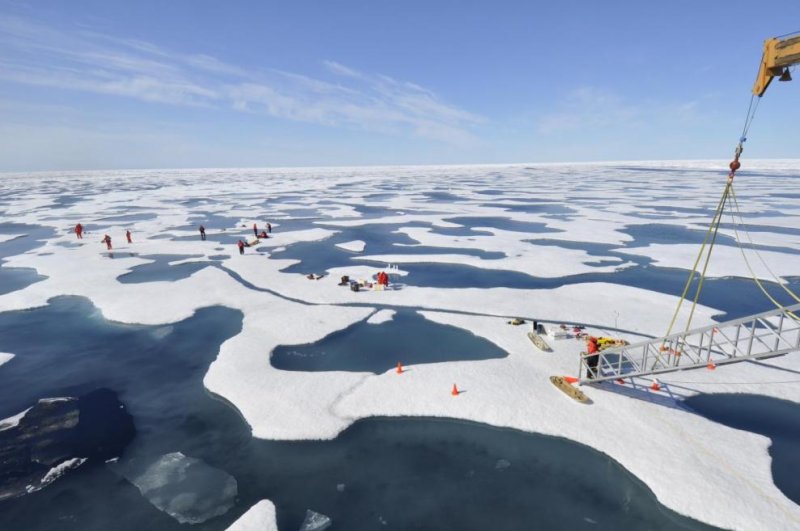 For decades, scientists assumed phytoplankton in the Arctic go dormant during the winter and early spring, proliferating only after Arctic sea ice begins to recede during the summer.

But a new review of the scientific literature on the subject — published Thursday in the journal Frontiers in Marine Science — suggests phytoplankton continue to perform photosynthesis and bloom beneath Arctic sea ice.

“There was a long-standing assumption that what was happening under the sea ice in the water column was almost ‘on pause’ during the polar night and before seasonal sea ice retreat, which is apparently not the case,” lead study author Mathieu Ardyna, postdoctoral research fellow at Stanford University, said in a news release.

The new paper, an amalgamation of several decades worth of research in algal blooms, suggests phytoplankton production may be as much an order of magnitude greater in some places than previously estimated.

Temperatures in the Arctic are warming faster than most everywhere on Earth, leading to significant reductions in sea ice — and as a result, phytoplankton blooms have exploded.

But the latest findings suggest phytoplankton have always been abundant in the Arctic.

Researchers uncovered phytoplankton surveys from the 1950s, conducted during a pair of Arctic drift expeditions, that documented small under-ice blooms occurring beneath thick ice in the central Arctic.

“I think this fact surprised many of us, as models had suggested this was not the case,” Ardyna said.

Because phytoplankton help pull CO2 from the atmosphere and ocean, understanding their abundance, distribution and seasonal patterns is essential to accurately modeling the Arctic’s carbon cycle and how it is likely to be affected by climate change.

“So many questions remain unanswered about this critical period of spring, for many Arctic species, for their food or their life cycle,” Ardyna said. “Given the remoteness of the Arctic, one way will definitely be to develop more and better autonomous platforms to give us valuable information.”