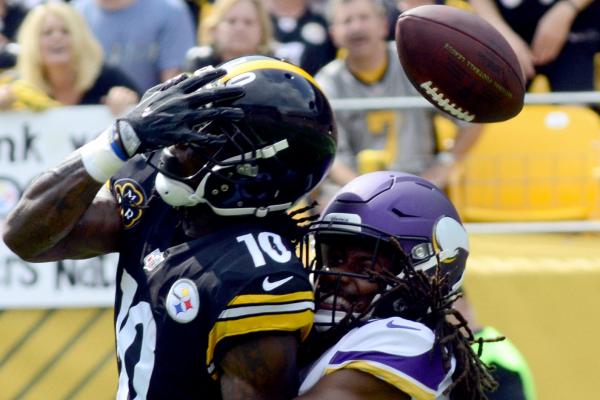 Pittsburgh Steelers wide receiver Martavis Bryant was demoted to the scout team on Wednesday and is expected to be inactive for Sunday night’s game against the Detroit Lions.

The 25-year-old Bryant told reporters Wednesday he is not playing Sunday.

Bryant told reporters after Wednesday’s practice he is frustrated.

“I’m not going to hide how I feel,” Bryant said. “What happened has happened.

“If I’m not traded I’m going to work my butt off here, and whatever happens happens. You’re not going to hear me complaining no more. I’m just going to be quiet and let everything fall into place.”

Bryant was targeted twice and caught one pass for 3 yards during last Sunday’s 29-14 win over the Cincinnati Bengals.

After the game on social media Sunday night, Bryant appeared to be asking for a trade again when he posted “give me what I want” and then did not show up to team meetings on Monday due to an illness.

Bryant also called out rookie receiver JuJu Smith-Schuster, who caught a 31-yard touchdown in the win, on a since-deleted post in responding to a fan on Instagram.

“JuJu is no where near better than me, fool,” Bryant wrote in his comment. “All they need to do is give me what I want and y’all can have JuJu and whoever else.”

Steelers coach Mike Tomlin was not pleased with Bryant’s comments.

Tomlin said the team was not going to trade Bryant.

Bryant told ESPN on Tuesday that he wants to “move on” if the Steelers don’t want to use him on offense.

“I just want to be happy, whether it’s here or it’s somewhere else,” Bryant said to ESPN. “I just want to help contribute. I just want to be the best player that I can on and off the field, and I want to be given the chance to be that. But I would like for it to be here. If not, then, oh well. Just got to move on.”

Quarterback Ben Roethlisberger had a message for the disgruntled wide receiver.

“I’m the guy that throws the ball, so if you’re unhappy about something, come talk to me,” Roethlisberger told reporters Wednesday. “Maybe there is something we can figure out together to make it better.”

Bryant missed all of last season for violating the league’s substance-abuse policy. He also was suspended for the first four games of the 2015 season for the same reason.

In the last two games, he played 34 snaps while getting three catches for 30 yards.