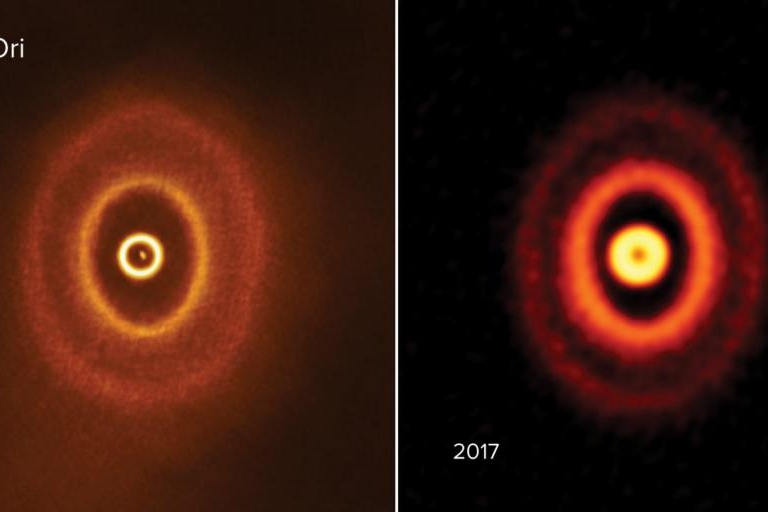 Sept. 3 (UPI) — Astronomers have discovered misaligned rings within the planet-forming disk surrounding a faraway, triple-star system, according to a study published Thursday in the journal Science.

Scientists suspect the disk was disrupted by the gravitational pull from one of the three stars.

The trio of stars that form GW Orionis are located approximately 1,300 light-years from Earth. The system is noted for its giant protoplanetary disk.

Recently, astronomers were able to confirm the disk’s misalignment using observations by the Atacama Large Millimeter/submillimeter Array, a powerful observatory in Chile.

By studying how the massive planet-forming disk came to be misaligned, researchers hope to better understand how planets around multi-star systems form and evolve.

“The idea that planets form in neatly-arranged, flat disks around young stars goes back to the 18th century and Kant and Laplace,” Stefan Kraus told UPI in an email.

“The GW Ori images reveal an extreme case where the disk is not flat at all, but is warped and has a misaligned ring that has broken away from the disk and that is now precessing around the stars,” said Kraus, an astronomer at the University of Exeter.

Kraus and his research partners suggest GW Orionis and its off-kilter protoplanetary disk rings are interesting for a few different reasons. For one, the system is rare.

“The disk structures in GW Orionis, on the other hand, extend out to 400 [astronomical unites], or more than 10-times the separation of Neptune from the sun,” Kraus said. “So the system has the potential to form circumtriple planets on very wide orbits.”

Researchers were able to identify the misalignment of the disk’s rings by analyzing the scattered light and shadows cast by the differently inclined rings of dust.

“Shadows on disks have been observed before, but to my knowledge this is the first case where we resolve the ring casting the shadow,” Kraus said. “Also, one is used to seeing ‘straight’ shadows on disk — here, we have the extraordinary case that the shadow apparently ‘changes’ direction due to the strong curvature in the inner warped region of the disk.”

Scientists ran simulations to better understand how the triple-star system’s disk came to be warped and misaligned. The simulations suggest the gravitational torque exerted by the three stars created a tearing effect in the ring.

As a result of the tearing effect, scientists predict GW Orionis will birth a variety of exoplanets with oblique orbits — orbits askew from the equators of their host stars.

“We predict that many planets on oblique, wide-separation orbits will be discovered in future planet imaging surveys,” Kraus said.

Thanks to the analysis by Kraus and his colleagues, astronomers now know the 3D orientation of the system’s protoplanetary disk, as well as the properties of all three stars, making GW Orionis an ideal model for the study of exoplanet formation.

“This makes GW Ori a benchmark for studying body-disk interactions in general, which will advance our understanding of planet formation as well,” he said.