Boris Johnson has announced a new national lockdown for England – with people instructed to “stay at home” as they did during last March’s first shutdown.

The prime minister revealed the action in an eight-minute TV address on Monday night, after being told that COVID-19 cases are rising rapidly in every part of the country due to the new coronavirus variant.

The public are being asked to follow the new rules, which have now replaced England’s tiers system.

It is expected the new lockdown in England – the third time a national shutdown has been introduced – will last until the middle of February.

Mr Johnson expressed his hope that, at this point, the most vulnerable will have all been offered the first dose of a vaccine.

From now, people across the whole country must now stay at home apart from five exceptions:

• for work, if people cannot work from home, such as those in the construction sector or key workers
• to shop for necessities such as food or medicines
• to exercise once per day at a local location. This can include with one other person from outside someone’s household or support/childcare bubble
• to provide care or help to vulnerable people
• to attend medical appointments, get medical care or a coronavirus test, or to flee the threat of harm or violence.

All primary schools, secondary schools and colleges will move to online learning from Tuesday.

Schools will remain closed for all pupils, apart from the children of key workers or those who are vulnerable, until the February half-term.

However, nurseries can remain open while childcare and support bubbles will stay in place.

Mr Johnson acknowledged the “inconvenience and distress” to pupils and parents.

But he defended not acting sooner – with some schools having returned from their Christmas holidays on Monday despite calls for them to have stayed shut – by saying ministers had “been doing everything in our power to keep schools open” until this point.

Mr Johnson said the government would work with the exams regulator to put in place “alternative arrangements”, as he admitted the new lockdown means “it is not possible or fair for all exams to go ahead this summer as normal”.

Students will not be able to return to universities and will be expected to study from their current residence, where possible, until mid-February.

Pubs, restaurants and cafes will be able to continue takeaway or click and collect services, but the sale of takeaway alcohol will no longer be allowed.

Essential shops, garden centres and places of worship can remain open but zoos and sports facilities – including golf courses, swimming pools and tennis courts – must close.

Elite sports – such as Premier League football – will continue, as will PE lessons for those children still attending school.

Shielding will resume for those who are judged to be clinically vulnerable, with those groups being urged to stay at home as much as possible and not go to work even if they can’t work from home.

They should only go outside for exercise or to attend health appointments.

Mr Johnson said the new coronavirus variant, judged to be between 50% and 70% more transmissible, was spreading at a “frustrating and alarming” speed.

The prime minister warned this means “you are much, much more likely to catch the virus and pass it on”.

“As I speak to you tonight, our hospitals are under more pressure from COVID than at any time since the start of the pandemic,” he added. 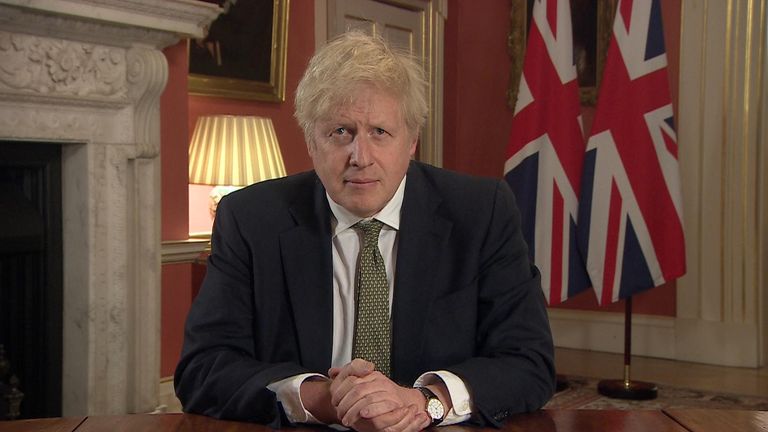 In full: Johnson’s address to the nation

As of Monday, there were 26,626 COVID patients in hospital in England – an increase of over 30% in one week and now more than 40% higher than the peak of the first wave of coronavirus infections last April.

There has also been a near 25% increase in the number of deaths in the past seven days, compared to the previous week.

But, despite the rising figures, the prime minister hailed COVID vaccines as “one huge difference” compared to England’s first lockdown last spring.

He outlined plans to offer a first vaccine dose to all care home residents, over-70s, all frontline health and social care workers, and everyone who is extremely vulnerable by the middle of next month.

“If we succeed in vaccinating all those groups, we will have removed huge numbers of people from the path of the virus,” he said.

“And of course, that will eventually enable us to lift many of the restrictions we have endured for so long.”

In a call for national unity, Mr Johnson said people “now more than ever, must pull together”.

“The weeks ahead will be the hardest yet but I really do believe that we are entering the last phase of the struggle,” he added.

The prime minister’s announcement came after the UK’s COVID alert level was raised from Level 4 to Level 5, the highest possible, for the first time.

In a stark warning, the UK’s chief medical officers said there was a “material risk of the NHS in several areas being overwhelmed over the next 21 days” without further action.

First Minister Nicola Sturgeon had earlier announced a nationwide lockdown would be introduced in Scotland from midnight tonight.

And the Welsh government announced that all schools and colleges will move to online learning until 18 January.

Northern Ireland’s First Minister Arlene Foster – who imposed a six-week lockdown in Northern Ireland from Boxing Day – said on Monday night the “stay at home” instruction would now be put back into law, with an update on schools to come on Tuesday.

The UK recorded 58,784 new coronavirus cases on Monday – the highest daily total since the start of the pandemic.

It is the seventh day in a row that there have been more than 50,000 daily cases, while government figures also showed there have been 407 more deaths in the past 24 hours.

The new lockdown restrictions will become law in the early hours of Wednesday morning, although the public is being urged to abide by them from now.

As they did in the spring of last year, police will have powers to enforce the new lockdown with fines and dispersal orders.

The House of Commons will be recalled from its current recess to sit on Wednesday, so MPs can hear a statement from Mr Johnson and to vote on the new lockdown restrictions.

“Whatever quarrels or challenges I have with the government, with the prime minister, in a sense tonight the really important thing is to say we support these measures,” he told Sky News.

“We’re all under a duty, I think, to do whatever we can to make them work.”

Sir Lindsay Hoyle, the Commons’ Speaker, urged MPs to stay away from Westminster “unless absolutely necessary” and to take part in Wednesday’s debate virtually.

New polling published by YouGov on Monday suggested 79% of Britons are supportive of another lockdown for the UK, compared to 16% who are against a fresh nationwide shutdown.